Van Alexander was born Alexander Van Vliet Feldman in Harlem.[1] His mother was a classical pianist, and she taught him to play the piano.[2] He studied music at Columbia University.[1] Alexander led bands and arranged music beginning in high school.

He landed a job selling arrangements to Chick Webb in the middle of the 1930s. A-Tisket, A-Tasket" became a hit for Webb and Ella Fitzgerald, becoming one of her signature tunes. Alexander arranged other nursery rhymes for jazz, such as "Where, Oh Where Has My Little Dog Gone?" and "Got a Pebble in My Shoe".[3]

In 1938, Alexander formed his own band[4]:459 and played in theaters into the 1940s. When his group disbanded, he and two others from the group joined Larry Clinton's orchestra. George T. Simon, in his book, The Big Bands, quoted Clinton as saying that he had "a package deal from Van Alexander. He had given up his band and joined us, and he brought along Butch Stone and Irv Cottler, whose drumming made all the difference in the world."[4] By June 1942, Alexander had formed another band of his own.[5] 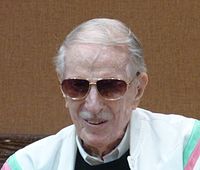 Later in the 1940s, he was hired by Bob Crosby to work in Hollywood and worked extensively as a composer, arranger, and conductor for film scores. He wrote a textbook on film arrangement in 1950 called First Arrangement, and Johnny Mandel studied under him.