The Boswell Sisters were an American close harmony singing trio of the jazz and swing eras, consisting of three sisters: Martha Boswell (June 9, 1905 – July 2, 1958), Connee Boswell (original name Connie, December 3, 1907 – October 11, 1976), and Helvetia "Vet" Boswell (May 20, 1911 – November 12, 1988). Hailing from uptown New Orleans, the group was noted for their intricate harmonies and rhythmic experimentation. They attained national prominence in the United States in the 1930s during the twilight years of the Jazz Age and the onset of the Great Depression.[1]

When the trio formally split in 1936, Connie continued as a solo vocalist in radio, film, and later television for an additional quarter of a century.[1] The trio's "unique singing style and ground-breaking arrangements fused 'blackness' and 'whiteness' in music," and their collaborations with "the preeminent white swing musicians of their day—the Dorsey Brothers, Glenn Miller, Benny Goodman, Artie Shaw—had a profound effect on the development of the big band sound in the 1930s."[1] When assessing their legacy, scholars claim the Boswell Sisters "made 'real' jazz commercially viable, destigmatizing the music and opening its appreciation to the wider American public."[2] 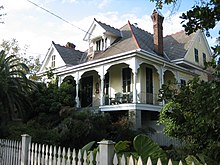 House on Camp Street in uptown New Orleans where the Boswell Sisters grew up.

Martha and Connie[a] were born in Kansas City, Missouri. Helvetia was born in Birmingham, Alabama. Born to a former vaudevillian, Clyde "A. C." Boswell,[3] and his music-loving wife, Meldania, the sisters—along with their 14-year-old brother Clyde Jr. ("Clydie")—landed in New Orleans as children, in 1914.[4] The sisters were raised in a middle-class family at 3937 Camp Street in uptown New Orleans, Louisiana.[5]

Martha, Connie, and Vet studied classical piano, cello, and violin, respectively, under the tutelage of Tulane University professor Otto Finck.[6][7] They performed their classical repertoire in local recitals, often as a trio, but the city's jazz scene swiftly won them over, personally and professionally. "We studied classical music . . . and were being prepared for the stage and a concert tour throughout the United States, but the saxophone got us," Martha said in a 1925 interview with the Shreveport Times.[8]

In addition to providing the young Boswells with formal, classical musical education, Meldania Boswell took her children regularly to see the leading African–American performers of the day at the Lyric Theatre.[9] There, young Connie heard Mamie Smith, whose "Crazy Blues" (1920), the first blues record performed by an African American, was a hit. Connie would later imitate Smith's style on the Boswells' first record, "I'm Gonna Cry (Cryin' Blues)," before settling into her own vocal style.[10][11] In interviews, the sisters recalled driving around New Orleans listening for new and interesting sounds, which they often found outside African–American churches and barrooms.

After becoming interested in jazz, Vet took up the banjo and Connie the saxophone. Martha continued playing the piano but focused on the rhythms and idioms of ragtime and hot jazz. 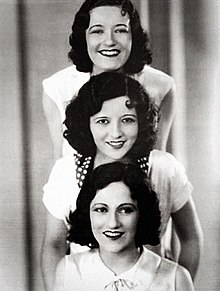 The sisters came to be well known in New Orleans while still in their early teens, making appearances in local theaters and on the emerging medium of radio.[12] By the early 1920s,[12] they were performing regularly at local vaudeville theaters, with an act that combined classical, semi-classical, and jazz styles—though, as their popularity increased, the classics faded into the background.

The sisters performed as they would for virtually their entire career: Martha and Connie seated at the piano, with Vet close behind. This arrangement served to disguise Connie's inability to walk, a condition whose source has never been fully confirmed. A childhood bout with polio[13] and a go-cart accident are the two main hypotheses, and Connie backed up both of them in various media sources. One theory holds that Meldania crafted the go-cart accident story in order to spare her daughter the stigma attached to the disease.[14]

In 1925 they made their first record for the Victor Records. After touring with a vaudeville company through Arkansas, Texas, and Oklahoma, the sisters arrived in Los Angeles in October 1929, mere weeks after the stock market crash which marked the beginning of the Great Depression.[12] They appeared on radio programs, recorded music for films, and undertook several recordings for OKeh Records, recorded in Los Angeles in 1930. However, the unique approach of the trio to reworking melodies and their improvisational style did not garner universal acclamation.[15]

In their inaugural year of radio broadcasting in California, "station employers received letters of opprobrium from outraged listeners voicing disapproval of the sisters' new and unusual arranging and singing styles.[15] One letter stated: "Why don't you choke those Boswell Sisters? How wonderful it would be if they sang just one song like it was written. Really when they get through murdering it, one can never recognize the original."[12] Another outraged letter from an angry listener read: "Please get those terrible Boswell Sisters off the station! You can't follow the melody and the beat is going too rapidly. And to me they sound like savage chanters!"[16]

After relocating to New York City in 1930, the Boswell Sisters soon attained national attention and began making national radio broadcasts. The trio had a program on CBS from 1931 to 1933.[17] They soon signed a contract with Brunswick Records and made recordings from 1931 to 1935 under the aegis of producer Jack Kapp.[18] These Brunswick recordings are widely regarded as milestone recordings of vocal jazz.[18] For their Brunswick recordings, "the Boswells took greater liberties, regularly changing style, tempi, modality, lyrics, time signatures and voicings (both instrumental and vocal) to create unexpected textures and effects."[18]

Connee's reworkings of the melodies and rhythms of popular songs, together with Glenn Miller's arrangements and New York jazz musicians (including the Dorsey Brothers, Benny Goodman, Bunny Berigan, Fulton McGrath, Joe Venuti, Arthur Schutt, Eddie Lang, Joe Tarto, Mannie Klein, Dick McDonough, and Carl Kress), made these recordings unlike any others. Melodies were rearranged and slowed down, major keys were changed to minor keys (sometimes in mid-song), and unexpected rhythmic changes were par for the course. They were among the few performers who were allowed to make changes to current popular tunes since, during this era, music publishers and record companies pressured performers not to alter current popular song arrangements.[18] Connee also recorded a series of more conventional solo records for Brunswick during the same period.

The Boswell Sisters soon appeared in films during this time. They sang the lively "Shout, Sister, Shout" (1931), written by Clarence Williams, in the 1932 film The Big Broadcast, which featured Bing Crosby and Cab Calloway.[b] The song—one of the sisters' signature tunes—was described in a November 2011 issue of the music magazine Mojo as "by no means as archaic as its age." They sang their 1934 song "Rock and Roll" in the film Transatlantic Merry-Go-Round, bringing with them an early use of the phrase rock 'n' roll, referring in the song to "the rolling rocking rhythm of the sea".

The Boswell Sisters chalked up 20 hits during the 1930s, including the number-one record "The Object of My Affection" (1935). (Of special note is their involvement in a handful of 12" medley/concert recordings made by Red Nichols, Victor Young and Don Redman and their 1934 recording of "Darktown Strutters' Ball", which was issued only in Australia.) They also completed two successful tours of Europe, appeared on the inaugural television broadcast of CBS, and performed on Hello, Europe, the first internationally broadcast radio program.

The Boswell Sisters were among radio's earliest stars, making them one of the first hit acts of the mass-entertainment age. In 1934, the Sisters appeared 13 times on the Bing Crosby Entertains radio show on CBS. They were featured in fan magazines, and their likenesses were used in advertisements for beauty and household products.[19] During the early 1930s the Boswell Sisters, Three X Sisters, and Pickens Sisters were the talk of early radio female harmonizing. The Andrews Sisters started out as imitators of the Boswell Sisters.[20] Young Ella Fitzgerald loved the Boswell Sisters and in particular idolized Connee, after whose singing style she patterned her own.[21]

In 1936, the group signed to Decca, but after just three records they broke up. The last recording was February 12, 1936. Approximately one month earlier, Martha Boswell had married Major George L. Lloyd of Britain's Royal Air Force. Connie served as her sister's only attendant at the wedding and Harold J. Warner served as their best man.[22] Lloyd was the managing director of the Aero Insurance Underwriters in New York.[22] He was a Rhodesian-born flying ace of the Great War, credited with eight aerial victories.[23] Connie Boswell continued to have a successful solo career as a singer for Decca. She changed[a] the spelling of her name from Connie to Connee in the 1940s, reputedly because it made it easier to sign autographs.[13] When she tried to become involved with the overseas USO tours during World War II, she was not granted permission to travel overseas because of her disability. 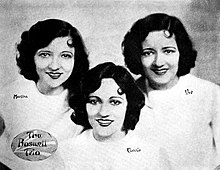 Later groups such as the Pfister Sisters, the Stolen Sweets, Boswellmania, the Puppini Sisters, YazooZazz, the Spanish group O Sister!, the Italian trio Sorelle Marinetti, and the Israeli band the Hazelnuts imitated the sisters' recordings. Canada's Company B Jazz Band includes many Boswell Sisters arrangements in its repertoire and even created a set saluting the Boswells' appearance in Transatlantic Merry-Go-Round for the cover of their second album, Rock & Roll. The Ditty Bops have covered Boswell Sisters songs in concert. Caffeine Trio from Brazil also claims to have been influenced by them. There is also an Australian group, the Boswell Project, based in Adelaide, South Australia. A London harmony trio, The Haywood Sisters, have also recorded some Boswell Sisters hits and are greatly influenced by their style.

In 2001, The Boswell Sisters, a major musical based on their lives, was produced at the Old Globe Theatre in San Diego, California. The play starred Michelle Duffy, Elizabeth Ward Land, and Amy Pietz and was produced by the same team that produced Forever Plaid. The show was a hit with audiences and a critical success, but failed to be picked up for a much hoped-for Broadway run.

In 2014, Vet's daughter and granddaughter published The Boswell Legacy, the first comprehensive book on the life and times of the influential trio.[5] That same year, the 52-track compilation double-CD Shout! Shout! Shout! was released by Retrospective Records. In his review of the album, Robert Christgau wrote of the Sisters: "They were so prolific and original that except for Billie [Holiday] and their fan Ella they were not just the premier jazz singers of the decade, rewriting melodies at will, but pop stars with a dozen top 10 singles. The Boswells didn’t just imitate instruments when the fancy struck them, they sang as though they were instruments, outswinging both the ‘30s competition and such heirs as Lambert, Hendricks and Ross."[24]