George Robert Crosby (August 23, 1913 – March 9, 1993)[1] was an American jazz singer and bandleader, best known for his group the Bob-Cats, which formed around 1935. The Bob-Cats was a New Orleans Dixieland-style jazz octet. He was the younger brother of famed singer and actor Bing Crosby. On TV, Bob Crosby guest-starred in The Gisele MacKenzie Show and was also seen on The Jack Benny Program. Crosby hosted his own afternoon TV variety show on CBS, The Bob Crosby Show (1953–1957). Crosby received two stars on the Hollywood Walk of Fame, for television and radio.

Crosby was born in Spokane, Washington,[1] to bookkeeper Harry Lowe Crosby and Irish-American Catherine "Kate" Harrigan, the daughter of a builder from County Mayo in Ireland.[2]

Crosby attended Gonzaga College, but he dropped out to seek a career in music. During World War II, he served in the U.S. Marines, leading a band for much of his time in service.[2] 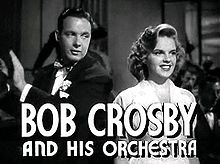 Crosby began singing in the early 1930s with the Rhythm Boys, which included vocalist Ray Hendricks and guitarist Bill Pollard, and with Anson Weeks (1931–1934) and the Dorsey Brothers (1934–35).[1] He led his first band in 1935 when the former members of Ben Pollack's band elected him their titular leader.[1] In 1935, he recorded with the Clark Randall Orchestra led by Gil Rodin and featuring singer Frank Tennille (a.k.a. Clark Randall). Glenn Miller was a member of that orchestra, which recorded the Glenn Miller novelty composition "When Icky Morgan Plays the Organ" in 1935.[3] Crosby's "band-within-the-band," the Bob-Cats, was a dixieland octet with soloists from the larger orchestra, many from New Orleans. The band included at various times Ray Bauduc, Yank Lawson, Billy Butterfield, Charlie Spivak, Muggsy Spanier, Irving Fazola, Nappy Lamare, Jack Sperling, Joe Sullivan, Jess Stacy, Bob Haggart, Walt Yoder, and Bob Zurke.

In the spring of 1940, during a performance in Chicago, teenager Doris Day was hired as the band's vocalist.[4]

For its theme song, the band chose George Gershwin's song "Summertime." The band's hits included "South Rampart Street Parade", "March of the Bob Cats", "In a Little Gypsy Tea Room", "Whispers in the Dark", "Day In, Day Out", "Down Argentine Way", "You Must Have Been a Beautiful Baby", "Dolores", and "New San Antonio Rose" . A bass-and-drums duet between Haggart and Bauduc, "Big Noise from Winnetka", became a hit in 1938–39.

There were reunions in the 1950s and 1960s.[1] Bob Haggart and Yank Lawson organized a band that combined dixieland and swing to try to carry on the legacy of Bob Crosby. From the late 1960s until the mid 1970s, the band was known as the World's Greatest Jazz Band, but when both became dissatisfied with the name they changed it to the Lawson-Haggart Jazz Band. During that time there was a revival of interest in big band jazz and he worked for Disney studios and toured the midwest.[5]

During World War II, Bob Crosby spent 18 months in the Marines touring with bands in the Pacific. His radio variety series, The Bob Crosby Show, aired on NBC and CBS in different runs from July 18, 1943, to July 16, 1950.[6] This was followed by Club Fifteen on CBS from 1947 through 1953 minus a brief interlude when he was replaced as host by singer Dick Haymes during parts of 1949 and 1950. During his stint on Club Fifteen, he was teamed with the ever-popular Andrews Sisters three nights per week, singing with them and engaging in comedy skits. He first met the trio in 1938 when his orchestra backed their Decca recording of "Begin the Beguine", their popular vocalization of Artie Shaw's big band hit. One can't help when hearing these old Club Fifteen broadcasts how eerily similar Bob and the Andrews Sisters sound to the trio's very frequent and hugely successful pairings with brother Bing Crosby on the Decca label. Bob and Patty even scored a hit duet on Decca Records with their duet recording of the novelty "The Pussy Cat Song (Nyow! Nyot Nyow!)", which peaked at No. 12 on Billboard.[7] A half-hour CBS daytime series, The Bob Crosby Show, followed from 1953 to 1957. Bob introduced the Canadian singer Gisele MacKenzie to American audiences and subsequently guest-starred in 1957 on her NBC television series, The Gisele MacKenzie Show.

On September 14, 1952, he replaced Phil Harris as the bandleader on The Jack Benny Program, remaining until Benny retired the weekly radio show in May 1955 after 23 years. In joining the show, he became the leader of the same group of musicians who had played under Harris. According to Benny writer Milt Josefsberg, the issue was budget. Because radio had strong competition from TV, the program budget had to be reduced, and so Bob replaced Phil. Prior to joining Benny on the radio, Crosby, who was based on the east coast, would often play with Benny during Benny's live New York appearances, and he was seen frequently throughout the 1950s on Benny's television series.

As a performer, Crosby had tremendous charisma and wit combined with a laid-back persona.[1] He was able to swap jokes competently with Benny, including humorous references to his brother Bing's wealth and his string of losing racehorses. An exchange during one of the popular Christmas programs ran thus: Crosby muses to Jack that he's bought gifts for everyone but band member Frank Remley. When Jack suggests "a cordial, like a bottle of Drambuie", Crosby counters that Drambuie is an after-dinner drink and adds, alluding to Remley's penchant for alcohol, that "Remley never quite makes it to after dinner".

Bob Crosby guest-starred in the television series The Gisele MacKenzie Show. He also starred in his own afternoon variety show, The Bob Crosby show, that aired from 1953 to 1957. He also fronted a TV program in Australia in the 1960s. He was one of two featured singers (himself and Dennis Day) in mid-1950s episodes of The Jack Benny Program.

Crosby's first marriage was to Marie Elizabeth Grounitz.[2] They had a daughter, Elizabeth Ann.[8] He married socialite June Kuhn at his home in Spokane on September 22, 1938. They had five children: Christopher, George, Stephen, Cathleen and Junie. Crosby died in La Jolla, California, on March 9, 1993, at 79, from complications of cancer.[9]

Bob Crosby was among hundreds of artists whose material was reportedly destroyed in the 2008 Universal fire.[10]