Stanley Getz (February 2, 1927 – June 6, 1991) was an American jazz saxophonist, professionally known as Stan Getz. Playing primarily the tenor saxophone, Getz was known as "The Sound" because of his warm, lyrical tone, his prime influence being the wispy, mellow timbre of his idol, Lester Young. Coming to prominence in the late 1940s with Woody Herman's big band, Getz is described by critic Scott Yanow as "one of the all-time great tenor saxophonists".[1] Getz performed in bebop and cool jazz groups. Influenced by João Gilberto and Antônio Carlos Jobim, he popularized bossa nova in America with the hit single "The Girl from Ipanema" (1964).

Stan Getz was born on February 2, 1927, at St. Vincent's Hospital in Philadelphia, Pennsylvania, United States.[2] Getz's father Al was born in Mile End, London, in 1904, while his mother Goldie (née Yampolsky) was born in Philadelphia in 1907. His paternal grandparents Harris and Beckie Gayetski were originally from the Kiev area of the Russian Empire (now Ukraine) but had migrated to escape the anti-Jewish pogroms in the Russian Empire to Whitechapel, in the East End of London. There, they owned the Harris Tailor Shop at 52 Oxford Street for more than 13 years. In 1913, Harris and Beckie emigrated to the United States with their three sons Al, Phil, and Ben, following their son Louis Gayetski who had emigrated to the US the year before.

The Getz family first settled in Philadelphia, but during the Depression the family moved to New York City, seeking better employment opportunities. Getz worked hard in school, receiving straight As, and finished sixth grade close to the top of his class. Getz's major interest was in musical instruments and he played a number of them before his father bought him his first saxophone at the age of 13. Even though his father also got him a clarinet, Getz instantly fell in love with the saxophone and began practicing eight hours a day.

He attended James Monroe High School in the Bronx. In 1941, he was accepted into the All City High School Orchestra of New York City. This gave him a chance to receive private, free tutoring from the New York Philharmonic's Simon Kovar, a bassoon player. He also continued playing the saxophone. He eventually dropped out of school in order to pursue his musical career, but was later sent back to the classroom by the school system's truancy officers.[1]

In 1943, at the age of 16,[3] he was accepted into Jack Teagarden's band, and because of his youth he became Teagarden's ward.[2] Getz also played along with Nat King Cole and Lionel Hampton. After playing for Stan Kenton, Jimmy Dorsey, and Benny Goodman, Getz was a soloist with Woody Herman from 1947 to 1949[2] in "The Second Herd", and he first gained wide attention as one of the band's saxophonists, who were known collectively as "The Four Brothers"; the others being Serge Chaloff, Zoot Sims and Herbie Steward.[3] With Herman, he had a hit with "Early Autumn" and after Getz left "The Second Herd" he was able to launch his solo career. He was the leader on almost all of his recording sessions after 1950.[2]

Getz's reputation was greatly enhanced by his featured performance on Johnny Smith's 1952 album Moonlight in Vermont, that year's top jazz album. The single of the title tune became a hit that stayed on the charts for months.[4]

Returning to the U.S. from Europe in 1961, Getz became a central figure in introducing bossa nova music to the American audience.[2] Teaming with guitarist Charlie Byrd, who had just returned from a U.S. State Department tour of Brazil, Getz recorded Jazz Samba in 1962 and it quickly became a hit. Getz won the Grammy for Best Jazz Performance of 1963 for "Desafinado", from the same album. It sold over one million copies, and was awarded a gold disc.[5] His second bossa nova album, also recorded in 1962, was Big Band Bossa Nova with composer and arranger Gary McFarland. As a follow-up, Getz recorded the album, Jazz Samba Encore!, with one of the originators of bossa nova, Brazilian guitarist Luiz Bonfá. It also sold more than a million copies by 1964, giving Getz his second gold disc.[5]

He then recorded the album Getz/Gilberto, in 1963,[6] with Antônio Carlos Jobim, João Gilberto and his wife, Astrud Gilberto. Their "The Girl from Ipanema" won a Grammy Award. The piece became one of the most well-known Latin jazz tracks. Getz/Gilberto won two Grammys (Best Album and Best Single). A live album, Getz/Gilberto Vol. 2, followed, as did Getz Au Go Go (1964), a live recording at the Cafe au Go Go. While still working with the Gilbertos, he recorded the jazz album Nobody Else but Me (1964), with a new quartet including vibraphonist Gary Burton, but Verve Records, wishing to continue building the Getz brand with bossa nova, refused to release it. It came out 30 years later, after Getz had died.

In 1972, Getz recorded the jazz fusion album Captain Marvel with Chick Corea, Tony Williams and Stanley Clarke, and in this period experimented with an Echoplex on his saxophone. He had a cameo in the film The Exterminator (1980).

In the mid-1980s, Getz worked regularly in the San Francisco Bay area and taught at Stanford University as an artist-in-residence at the Stanford Jazz Workshop until 1988. In 1986, he was inducted into the Down Beat Jazz Hall of Fame. During 1988, Getz worked with Huey Lewis and the News on their Small World album. He played the extended solo on part 2 of the title track, which became a minor hit single.

His tenor saxophone of choice was the Selmer Mark VI. 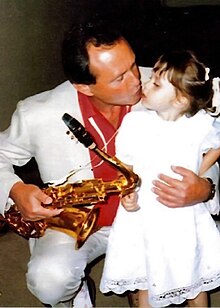 With his granddaughter Katie in 1987 at the Lincoln Center

Getz married Beverly Byrne, a vocalist with the Gene Krupa band, on November 7, 1946 in Los Angeles; they had three children together, Steve, David and Beverly. As a teenager, both had become involved with drugs and alcohol. In 1954, he was arrested for attempting to rob a pharmacy for morphine. As he was being processed in the prison ward of Los Angeles County-USC Medical Center, Beverly gave birth to their third child one floor below.[citation needed]

Getz was divorced from Byrne in Mexico in 1956, after which, due to Byrne's own addictions, she was unable to take care of the children. Eventually, the children were rescued and awarded by the Court to Getz' second wife, Monica Silfverskiöld,[7] daughter of Swedish physician and former Olympic medalist, Nils Silfverskiöld and Swedish Countess Mary von Rosen. Monica had insisted on raising the family together, as the children had been divided among family members, and eventually, they would raise five children: Steven, David, Beverley, Pamela, and Nicolaus, the last two of which were from their own marriage. The couple lived in Copenhagen, Denmark, partly to escape the prevalence of drugs in America at the time. Monica would also become Stan's manager and a major influence in his life.

In 1962, Monica returned with the family to Sweden, after having discovered Stan's recurring addictions. During the following period, as he was trying to persuade her to come back, he sent her two test pressings, one of which, Jazz Samba with Charlie Byrd, was pivotal to her plans for the next record, Getz/Gilberto. However, Getz' soured relationship with Byrd, due to a lawsuit initiated by Byrd,[8] made him apprehensive.

After Getz promised to stay clean and sober, Monica returned from Sweden with the family. On November 21 of 1962, Brazil sent scores of musicians to Carnegie Hall[9] as a result of the Bossa Nova craze created Jazz Samba,[10] which in turn, had improved the economy of Brazil. Monica, who was told by Gilberto and Jobim that Getz had been an invisible partner in their creating of the Bossa Nova, by superimposing Getz' Jazz harmonies and sound on the old Samba, suggested a unification of the three. Jobim and Gilberto reacted with deference and enthusiasm. Getz was reluctant, at first, as he had heard the two were "difficult". Getz had reportedly said that he was convinced, when Monica retorted "Well, don't you have a reputation for being difficult?". They would become very close friends during the recording of Getz/Gilberto, and Gilberto would even move in with the Getz', occasionally joined by the children of his own two marriages and his second wife, Miucha.

In the 1980s, Getz again relapsed into various addictions, resulting in an arrest with an illegal gun in the home with Monica and some of the children. This resulted in an Order of Protection, issued in her favor, which contained a clause that Getz must be sober to be allowed into the house and an Order he go to treatment. As a countermove, Getz filed for divorce from Monica in 1981,[11] but the couple reconciled at his insistence in 1982 and signed a Reconciliation Agreement, in which they agreed to jointly buy a house they found in San Francisco. Soon after, however, Getz relapsed and also developed cancer. After a second illegal gun/cocaine incident, Monica returned to their New York home. At this time, she discovered the need for the courts to learn about addictions, and she founded the National Coalition for Family Justice[12] in 1988, around the time a divorce was finalized. In 1990, Monica Getz petitioned the United States Supreme Court to have their divorce verdict overturned. The Supreme Court kept the case until its final cut,[13] shortly before he died in 1991.

Zoot Sims, who had known Getz since their time with Herman, once described him as "a nice bunch of guys", alluding to the wide range of his personality.[citation needed]

Getz died of liver cancer on June 6, 1991.[citation needed] His ashes were poured from his saxophone case six miles off the coast of Marina del Rey, California. In 1998, the Stan Getz Media Center and Library at Berklee College of Music was dedicated through a donation from the Herb Alpert Foundation.