Louie Bellson (born Luigi Paulino Alfredo Francesco Antonio Balassoni on July 6, 1924 – February 14, 2009), known by the stage name Louie Bellson (his own preferred spelling, although he is often seen in sources as Louis Bellson), was an American jazz drummer. He was a composer, arranger, bandleader, and jazz educator, and is credited with pioneering the use of two bass drums.[1]

Bellson was an internationally acclaimed artist who performed in most of the major capitals around the world. Bellson and his wife, actress and singer Pearl Bailey[2] (married from 1952 until Bailey's death in 1990), had the second highest number of appearances at the White House (only Bob Hope had more).

Bellson was a vice president at Remo, a drum company.[3] He was inducted into the Modern Drummer Hall of Fame in 1985.[4] 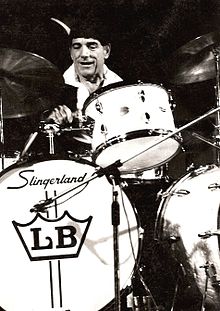 Bellson was born in Rock Falls, Illinois in 1924, where his father owned a music store. He started playing drums at three years of age. While still a young child, Bellson's father moved the family and music store to Moline, Illinois.[5] At 15, he pioneered using two bass drums at the same time, a technique he invented in his high school art class.[6] At age 17, he triumphed over 40,000 drummers to win the Slingerland National Gene Krupa contest.[7]

After graduating from Moline High School in 1942, he worked with big bands throughout the 1940s, with Benny Goodman, Tommy Dorsey, Harry James, and Duke Ellington. In 1952, he married jazz singer Pearl Bailey. During the 1950s, he played with the Dorsey Brothers, Jazz at the Philharmonic, acted as Bailey's music director, and recorded as a leader for Norgran Records and Verve Records.[8]

In an interview in 2005 with Jazz Connection magazine, he cited as influences Jo Jones, Sid Catlett, and Chick Webb. "I have to give just dues to two guys who really got me off on the drums – Big Sid Catlett and Jo Jones. They were my influences. All three of us realized what Jo Jones did and it influenced a lot of us. We all three looked to Jo as the 'Papa' who really did it. Gene helped bring the drums to the foreground as a solo instrument. Buddy was a great natural player. But we also have to look back at Chick Webb's contributions, too."[9]

During the 1960s, he returned to Ellington's orchestra for Emancipation Proclamation Centennial stage production, My People in and for A Concert of Sacred Music, which is sometimes called The First Sacred Concert. Ellington called these concerts "the most important thing I have ever done."[10]

Bellson's album The Sacred Music of Louie Bellson and the Jazz Ballet appeared in 2006. In May 2009, Francine Bellson told The Jazz Joy and Roy syndicated radio show, "I like to call (Sacred) 'how the Master used two maestros,'" adding, "When (Ellington) did his sacred concert back in 1965 with Louie on drums, he told Louie that the sacred concerts were based on 'in-the-beginning,' the first three words of the bible." She recalled how Ellington explained to Louie that "in the beginning there was lightning and thunder and that's you!" Ellington exclaimed, pointing out that Louie's drums were the thunder. Both Ellington and Louie, says Mrs. Bellson, were deeply religious. "Ellington told Louie, 'You ought to do a sacred concert of your own' and so it was," said Bellson, adding, "'The Sacred Music of Louie Bellson' combines symphony, big band and choir, while 'The Jazz Ballet' is based on the vows of Holy Matrimony..."[11]

On December 5, 1971 he took part in a memorial concert at London's Queen Elizabeth Hall for drummer Frank King. This tribute show also featured Buddy Rich and British drummer Kenny Clare. The orchestra was led by Irish trombonist Bobby Lamb and American trombonist Raymond Premru. A few years later, Rich (often called the world's greatest drummer) paid Bellson a compliment by asking him to lead his band on tour while he (Rich) was temporarily disabled by a back injury. Bellson accepted.[12]

On June 25, 2019, The New York Times Magazine listed Louie Bellson among hundreds of artists whose material was reportedly destroyed in the 2008 Universal fire.[13] 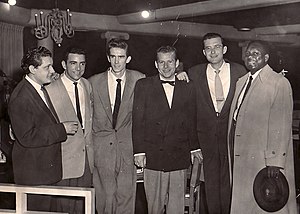 As a prolific creator of music, both written and improvised, his compositions and arrangements (in the hundreds) embrace jazz, jazz/rock/fusion, romantic orchestral suites, symphonic works and a ballet. Bellson was also a poet and a lyricist. His only Broadway venture, Portofino (1958), was a resounding flop that closed after three performances.[14]

As an author, he published more than a dozen books on drums and percussion. He was at work with his biographer on a book chronicling his career and bearing the same name as one of his compositions, "Skin Deep". In addition, "The London Suite" (recorded on his album Louie in London) was performed at the Hollywood Pilgrimage Bowl before a record-breaking audience. The three-part work includes a choral section in which a 12-voice choir sings lyrics penned by Bellson. Part One is the band's rousing "Carnaby Street", a collaboration with Jack Hayes.[15]

In 1987, at the Percussive Arts Society convention in Washington, D.C., Bellson and Harold Farberman performed a major orchestral work titled "Concerto for Jazz Drummer and Full Orchestra", the first piece ever written specifically for jazz drummer and full symphony orchestra. This work was recorded by the Bournemouth Symphony Orchestra in England, and was released by the Swedish label BIS.[16]

Bellson was known throughout his career to conduct drum and band clinics at high schools, colleges and music stores.[17]

Bellson maintained a tight schedule of clinics and performances of both big bands and small bands in colleges, clubs and concert halls. In between, he continued to record and compose, resulting in more than 100 albums and more than 300 compositions. Bellson's Telarc debut recording, Louie Bellson And His Big Band: Live From New York, was released in June 1994. He also created new drum technology for Remo, of which he was vice-president.[18]

Bellson received an honorary Doctor of Humane Letters in 1985 at Northern Illinois University. As of 2005, among other performing activities, Bellson had visited his home town of Rock Falls, Illinois every July for Louie Bellson Heritage Days, a weekend in his honor close to his July 6 birthday, with receptions, music clinics and other performances by Bellson.[1] At the 2004 event celebrating his 80th birthday, Bellson said, "I'm not that old; I'm 40 in this leg, and 40 in the other leg."[19] He celebrated his birthday every year at the River Music Experience in Davenport, Iowa.

Bellson was voted into the Halls of Fame for Modern Drummer magazine, in 1985, and the Percussive Arts Society, in 1978. Yale University named him a Duke Ellington Fellow in 1977. He received an honorary Doctorate from Northern Illinois University in 1985. He performed his original concert – Tomus I, II, III – with the Washington Civic Symphony in historic Constitution Hall in 1993. A combination of full symphony orchestra, big-band ensemble and 80-voice choir, "Tomus" was a collaboration of music by Bellson and lyrics by his late wife, Pearl Bailey. Bellson was a nine-time Grammy Award nominee.[20]

In January 1994, Bellson received the NEA Jazz Masters Award from the National Endowment for the Arts.[21] As one of three recipients, he was lauded by NEA chair Jane Alexander, who said, "These colossal talents have helped write the history of jazz in America."[22]

Trained as a physicist and engineer at MIT,[25] Wright became his manager. The union lasted until his death in 2009.[26]

On February 14, 2009, Bellson died at age 84 from complications of a broken hip suffered in December 2008 and Parkinson's disease. He is buried next to his father in Riverside Cemetery, Moline, Illinois.[27]

With The Trumpet Kings