La Rosa was born of Italian-immigrant parents in the Brooklyn borough of New York City. He attended P.S. 123K in Bushwick. At age 17, he joined the United States Navy after finishing high school, becoming a radioman. He sang in a Navy choir, at the officers' club, and at bars to pay for his drinks.[2]

LaRosa's Navy peers promoted him to Arthur Godfrey, one of America's leading radio and television personalities and a Naval Reserve officer himself. George Andrews from Omaha, Nebraska was a mechanic on Godfrey's airplane, and he struck up a conversation with Godfrey and told him that he should hear his friend sing. They arranged a time for La Rosa to audition in Pensacola, Florida where La Rosa was stationed. Godfrey was impressed and offered him a job.[2] He had La Rosa flown to New York to appear on his television show, with Godfrey ending the spot by saying, "When Julie gets out of the Navy he'll come back to see us."[2] La Rosa was discharged from the Navy on a Friday in November 1951, and he went to Godfrey on the following Monday and appeared on his variety show a week later. He was a regular on both the morning Arthur Godfrey Time and the Wednesday night variety show Arthur Godfrey and His Friends.

La Rosa was on Godfrey's shows from November 19, 1951 to October 19, 1953. Godfrey's band leader Archie Bleyer formed Cadence Records in 1952, and La Rosa was the first performer with whom they signed a contract. Cadence's first single was also La Rosa's first recording of "Anywhere I Wander". It reached the top 30 on the charts, and his next recording was "My Lady Loves to Dance", a moderate success. Between his popular records and his appearances on Godfrey's shows, La Rosa's popularity grew exponentially. At one point, his fan mail eclipsed Godfrey's. A year after La Rosa was hired, he was receiving 7,000 fan letters a week.[2]

Arthur Godfrey's management style was a curious combination of paternal affection and dictatorial direction. Years of speaking his mind, on and off the air, had conditioned him to do exactly as he pleased. He regarded his employees as a family (the cast members were known as "the Little Godfreys") and he took an interest in them personally, but he was the boss and his word was law. Godfrey had discouraged La Rosa and all other cast members from hiring a manager or booking agent; Godfrey preferred to handle these matters internally, with his staff coordinating and negotiating on the artists' behalf.[1]

One of Godfrey's mandates was for all cast members to attend dance classes, to make them appear more graceful on camera. La Rosa did not comply, claiming a family emergency. Shortly thereafter, La Rosa hired a personal agent and manager, Tommy Rockwell.[3]

Godfrey did not react well to receiving a formal notification that La Rosa had hired Rockwell. After consulting with CBS president Frank Stanton, Godfrey went before the TV cameras for Arthur Godfrey Time on the morning of October 19, 1953. After the televised portion of the program went off the air, the broadcast continued on the radio network. La Rosa sang "Manhattan"—and Godfrey fired him on the air,[1] announcing that La Rosa had become "his own star" and "that was Julie's swan song with us." La Rosa did not return to the microphone.

La Rosa tearfully met with Godfrey after the broadcast and thanked him for giving him his "break." La Rosa was then met at Godfrey's offices by his lawyer, his manager Tommy Rockwell, and some reporters. Rockwell was highly critical of Godfrey's behavior, angrily citing La Rosa's public humiliation.[4]

Godfrey subsequently explained that La Rosa had been fired because he lacked "humility." This comment backfired badly on Godfrey. Stanton regretted the on-air dismissal, later admitting, "Maybe it was a mistake." Comedians began working the phrase "no humility" into their routines. Singer Ruth Wallis, known for her raunchy double entendre novelty songs, recorded "Dear Mr. Godfrey",[5] a biting satire on the matter, which made it to #25 on the Billboard charts in November 1953.

The firing did not hurt La Rosa's career in the short run. Ed Sullivan immediately signed La Rosa for appearances on his CBS Toast of the Town TV variety show, which sparked a feud between Sullivan and Godfrey. La Rosa's first appearance on Toast of the Town following the firing (November 1, 1953) got a 47.9 Trendex rating; La Rosa would appear 12 more times on Sullivan's show that year.

Shortly after he left Godfrey, La Rosa's third recording, "Eh, Cumpari", hit #1 on the Cash Box chart and #2 on the Billboard chart, with La Rosa getting an award as the best new male vocalist of 1953. "Eh, Cumpari" was followed by another major hit, "Domani". For thirteen weeks during the summer of 1955, La Rosa had a three-times-a-week television series on CBS, The Julius La Rosa Show, featuring Russ Case and his Orchestra. The Julius La Rosa Show aired in an hour-long format in the summers of 1956 and 1957 at 8 p.m. Eastern on Saturdays on NBC as a seasonal replacement for The Perry Como Show (Como previously had La Rosa, on occasion, fill in for him during the 1954-'55 season of his CBS series).

In 1981, Peter Kelley, who handled Godfrey's commercial bookings, suggested the host reunite with cast members from his morning show and record a reunion album. Though Godfrey initially balked, recalling his disputes with La Rosa and other cast members, he agreed to a meeting, and was amenable to having La Rosa participate. La Rosa, feeling sufficient time had passed, was also amenable. At the meeting, held at Godfrey's Manhattan office, Godfrey brought up the firing and asked La Rosa why he didn't tell the "truth" as Godfrey saw it: that La Rosa had asked to be released from his contract and Godfrey had obliged. When La Rosa started to respond by reminding him of the dance-class dispute, Godfrey exploded in anger. La Rosa left, and any talk of a reunion show ended. La Rosa tired of revisiting the Godfrey affair, in part because it had been rehashed so many times, but he was also known to acknowledge Godfrey as the one individual who made his career. Nevertheless, La Rosa always added, "He wasn't a very nice man [to me]."[1] 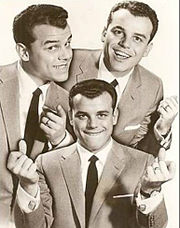 La Rosa appeared in a range of television shows, including The Honeymooners in 1953, What's My Line?, The Pat Boone Chevy Showroom, The Polly Bergen Show (two episodes, including the 1957 premiere), The Merv Griffin Show and Laverne and Shirley in 1980. He starred in the 1958 film Let's Rock. In 1977, he hosted an unsold game show pilot for NBC, Noot's Game.[6]

In 1970, the singer/actor became a very successful and amiable disc jockey at one of America's biggest radio stations in the top market, Metromedia's WNEW-AM 1130 in New York City. He hosted the 1:00-4:00 p.m. time slot at least through 1976, following William B. Williams' show which would eventually again become the Make-Believe Ballroom. During his first tenure at WNEW the station was more of an adult contemporary format rather than the traditional standards La Rosa was known for. He also sang some songs that were hits on the station. Those included: "Fire and Rain," from the "Words" album (Metromedia label) in 1971, "What'll I Do," and "Save Me a Song" (RCA Victor label)." He also recorded "We Need a Little Christmas" (1966), played during the holiday season on "the Big W." La Rosa would return to WNEW in the 1980s, doing various air shifts after the station returned to standards and big bands.

In the 1980s, La Rosa received a non-contract, recurring role in the NBC soap opera Another World, playing the character Reynoldo, for which he was nominated for a Best Supporting Actor in the Daytime Emmy Award.[7]

In 1998 and 1999, La Rosa was a disc jockey on 1430 WNSW based in Newark, New Jersey,[8] hosting "Make Believe Ballroom Time".[7] La Rosa, profiled by jazz critic and composer Gene Lees, continued to work clubs and release records until the early 2000s.[citation needed] New York Times film critic Stephen Holden said "His singing is very direct and unpretentious - he can wrap his voice tenaciously around a melody line and bring out the best in it."[9]

In 1953, La Rosa was romantically linked with then married Dorothy McGuire of The McGuire Sisters.

La Rosa's name was used in a joke by Coach in the sitcom Cheers, in the episode "Friends, Romans, and Accountants".