James Dorsey (February 29, 1904 – June 12, 1957) was an American jazz clarinetist, saxophonist, composer and big band leader. He was known as "JD". He recorded and composed the jazz and pop standards "I'm Glad There Is You (In This World of Ordinary People)" and "It's The Dreamer In Me". His other major recordings were "Tailspin", "John Silver", "So Many Times", "Amapola", "Brazil (Aquarela do Brasil)", "Pennies from Heaven" with Bing Crosby, Louis Armstrong, and Frances Langford, "Grand Central Getaway", and "So Rare". He played clarinet on the seminal jazz standards "Singin' the Blues" in 1927 and the original 1930 recording of "Georgia on My Mind", both inducted into the Grammy Hall of Fame.

With his brother Tommy playing trombone, he formed Dorsey's Novelty Six, one of the first jazz bands to broadcast. In 1924 he joined the California Ramblers (who were based in New York City). He did much freelance radio and recording work throughout the 1920s. In 1924 he married Jane Porter.[3] The brothers also appeared as session musicians on many jazz recordings. He joined Ted Lewis's band in 1930, with whom he toured Europe.[2]

In 1939 Jimmy hired Helen O'Connell as his female singer.[6] She and Eberly possessed a "boy and girl next door" charm and their pairing produced several of the band's biggest hits. Many of the Eberly-O'Connell recordings were arranged in an unusual 3-section "a-b-c" format. The three-part format was reportedly developed at the insistence of a record producer (then called an A&R executive) who wanted to feature both singers and the full band in a single 3-minute 78 rpm recording. Eberly sang the first minute, usually as a slow romantic ballad, the next minute featured the full band backing Jimmy's saxophone, and the last minute was sung by O'Connell in a more up-tempo style, sometimes with lyrics in Spanish.[2] Kitty Kallen sang with the Jimmy Dorsey orchestra following Helen O'Connell's departure in 1942.[7]Jerry Lewis' first wife Patti Palmer (birth name Esther Calonico) was a singer with his orchestra for less than a year, starting about 1944.[8] 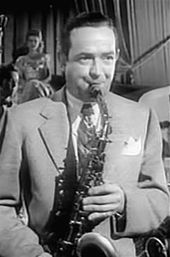 Jimmy continued leading his own band until the early 1950s. In 1949 he and Jane Porter were divorced. In 1953 he joined Tommy's Orchestra, renamed "Tommy Dorsey and his Orch. featuring Jimmy Dorsey". On December 26, 1953, the brothers and their orchestra appeared on Jackie Gleason's CBS television program.[9] The success of that television appearance led Gleason to produce a weekly variety program, Stage Show, hosted by the brothers on CBS from 1954 to 1956. Elvis Presley appeared on six of the telecasts.[10] These were Presley's first appearances on national TV.[10]

Jimmy took over leadership of the orchestra after Tommy's death. Jimmy survived his brother by only a few months and died of throat cancer, aged 53, in New York City. Broadcasts of Jimmy Dorsey and The Fabulous Dorsey Orchestra on NBC Bandstand survive from December 25, and December 31, 1956.[11] At least two other extant broadcasts from the month of December 1956 are available as well. Recordings of the band from their winter 1957 tour have not surfaced. These recordings would provide the last aural evidence of Jimmy Dorsey's work. It is thought that Dorsey's last appearance was in Joplin, Missouri, on March 12, 1957.[11]

Shortly before his death, he was awarded a gold record for "So Rare" which was recorded on November 11, 1956. It reached the number-two spot on the Billboard charts, becoming the highest charting song by a big band during the first decade of the rock-and-roll era.

Jimmy Dorsey is considered one of the most important and influential alto saxophone players of the Big Band and Swing era,[12] and also after that era. Jazz saxophonists Lester Young and Charlie Parker both acknowledge him as an important influence on their styles.[13]

During his early days as a musician, Jimmy Dorsey performed with various other ensembles and artists including the Scranton Sirens, The California Ramblers, Red Nichols, Jean Goldkette, Frankie Trumbauer, Ben Pollack, and Paul Whiteman. He played the clarinet solo on the iconic 1927 jazz standard "Singin' the Blues" with the Frankie Trumbauer Orchestra featuring Bix Beiderbecke. This recording was inducted into the Grammy Hall of Fame in 1977. He and his younger brother Tommy formed several bands known as "The Dorsey Brothers Orchestra" during the late 1920s and early 1930s which suddenly ended in May 1935, when Tommy stormed off the bandstand after an onstage argument. For several months, Jimmy continued leading the band, keeping the Dorsey Brothers name, hoping that his younger brother would return. In September 1935, the Dorsey Brothers band legally became the "Jim Dorsey Orchestra", after Jimmy found out that Tommy Dorsey now had his own band, and had signed a recording contract with RCA Victor. Jimmy Dorsey remained with Decca Records as the two brothers were now competing with each other musically.

He played clarinet on the iconic jazz standard "Georgia on My Mind" in 1930 with Hoagy Carmichael and His Orchestra which featured Bix Beiderbecke on cornet.

Jimmy Dorsey's first hit record was "You Let Me Down" in 1935. His early band was considered to be more jazz-oriented than his brother's, and recordings of some instrumental swing classics soon followed: Dorsey Stomp, Tap Dancer's Nightmare, Parade of the Milk Bottle Caps, John Silver, and Dusk in Upper Sandusky. The band was featured on 73[14] of Bing Crosby's Kraft Music Hall radio shows from December 1935 to July 1937 and also backed Crosby on his commercial recordings in the same period.

In 1936, Bing Crosby released the single "Pennies from Heaven" recorded with the Jimmy Dorsey Orchestra on Decca Records.

Dorsey left Crosby to concentrate on his own career[15] and he did well commercially, although being overshadowed by Benny Goodman, (also a clarinetist), whose big band had grabbed center stage in the mid thirties. Dorsey's main vocalist was Bob Eberly, considered to be the best in the music business, and in 1939, Helen O'Connell joined the band, and the idea to have them perform duets proved to be highly successful. Almost every record released during 1939–1943 were hits, but especially records made with a Latin American flavor like "Amapola", "Maria Elena", and "Green Eyes", which topped the charts in 1941. They continued singing with his band for future records and motion picture appearances. Despite personnel changes, Jimmy remained one of the top big band leaders after World War II and into the 1950s, always updating the sound of his band, but the big band business was beginning to decline. 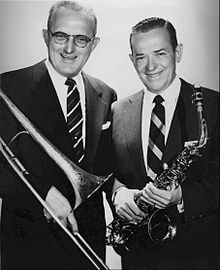 In 1953, he and his brother reunited to form a (new) "Dorsey Brothers Orchestra." Tommy was the leader of the group, making Jimmy the co-leader and featured soloist. In 1954, comedian Jackie Gleason chose them and their band as the summer replacement hosts for his weekly CBS Television variety series. The program, Stage Show, was a hit and returned in the fall of 1955 for a full season giving other big band leaders hope in a business that was steadily declining. Rock music history was made on Stage Show in January 1956 with the network television debut of Elvis Presley. Presley, promoting his early recordings for RCA Victor, made a total of six guest appearances. Competitive ratings from NBC's popular Perry Como Show forced Stage Show into an early cancellation.

The Dorsey brothers' deaths (Tommy choked to death in his sleep in 1956 and Jimmy died from cancer in 1957) brought an end to the Dorsey Brothers Orchestra. At the time of his death on June 12, 1957, Jimmy's final hit song, "So Rare", was in 2nd place on the music charts. Though he'd recorded the song years earlier, with an arrangement heavily influenced by R&B saxophonist Earl Bostic, it marked Dorsey's attempt to acknowledge rock music and marked a significant departure from his earlier work. This final recording sold 500,000 copies and earned him a gold record.[16]

On June 25, 2019, The New York Times Magazine listed Jimmy Dorsey and His Orchestra among hundreds of artists whose material was reportedly destroyed in the 2008 Universal fire.[17]

Dorsey appeared in a number of Hollywood motion pictures, including That Girl From Paris, Shall We Dance, The Fleet's In, Lost in a Harem with Abbot and Costello, I Dood It, and the bio-pic with his brother Tommy, The Fabulous Dorseys in 1947.

In 1938, Jimmy Dorsey and His Orchestra also appeared in a movie short performing many of his hits including "It's the Dreamer in Me", "I Love You in Technicolor", and "Parade of the Milk Bottle Caps".

Dorsey composed "Mood Hollywood", "Shim Sham Shimmy", "So Many Times", which reached no. 20 in 1939 on Billboard, staying on the charts for one week,[18] also recorded by Glenn Miller and his Orchestra and Jack Teagarden and his Orchestra, "Beebe", "Oodles of Noodles", "John Silver" with Ray Krise, which reached no. 13 on Billboard in 1938, staying on the charts for 2 weeks, "Parade of the Milk Bottle Caps", "Dusk in Upper Sandusky" with Larry Clinton, "Shoot the Meatballs to Me Dominick Boy" with Toots Camarata, "A Man and his Drums", "Mutiny in the Brass Section", "Praying the Blues", "Contrasts", his theme song; "Major and Minor Stomp", "Hep-Tee Hootie (Juke Box Jive)" with Fud Livingston and Jack Palmer, "I Bought A Wooden Whistle", "Tailspin" with Frankie Trumbauer, the classic jazz standard "I'm Glad There Is You (In This World of Ordinary People)", "Clarinet Polka", "I Love You in Technicolor", "All The Things You Ain't" with Babe Russin, "JD's Boogie Woogie", "Jumpin' Jehosaphat", "I'll Do Anything For You", "Any Time at All", "Two Again", "It's Anybody's Moon", "Dixieland Detour", "Shades of Twilight", "Dorsey Stomp", "Grand Central Getaway" with Dizzy Gillespie, "Sunset Strip" and "The Champ" with Sonny Burke, "Town Hall Tonight", "Outer Drive" with Herb Ellis, the jazz standard "It's the Dreamer in Me" with Jimmy Van Heusen, recorded by Duke Ellington and others.

Dorsey co-wrote the jazz and pop standard "(In This World of Ordinary People) I'm Glad There Is You" with Paul Madeira, also known as Paul Mertz, in 1941. Mertz had been a pianist with the Jean Goldkette orchestra in the 1920s and had worked in Hollywood. Sung by Dorsey vocalist Bob Eberly, it was released on Decca as 4197B in 1942.[19] It was also released on Decca 18799A with Dee Parker in 1946.

Jimmy Dorsey had eleven number one hits with his orchestra in the 1930s and the 1940s: "Is It True What They Say About Dixie?", "Change Partners", "The Breeze and I", "Amapola", "My Sister and I", "Maria Elena", "Green Eyes", "Blue Champagne",[6] "Tangerine", "Besame Mucho", and "Pennies from Heaven" with Bing Crosby. In 1935, he had two more number ones as part of the Dorsey Brothers Orchestra: "Lullaby of Broadway" and "Chasing Shadows". His biggest hit was "Amapola", which was number one for ten weeks in 1941 on the Billboard pop singles chart. And finally, there was a late hit in 1957, "So Rare", which went to the No. 2 position, and was on the record charts for 26 weeks.

In 2008, the Recording Academy added the 1942 recording of "Brazil (Aquarela do Brasil)", Decca 18460B, by Jimmy Dorsey & His Orchestra with Bob Eberle and Helen O'Connell on vocals to the Grammy Hall of Fame. He also played on two other recordings which were inducted in the Grammy Hall of Fame, "Singin' the Blues" and "Georgia on My Mind".[citation needed]

On June 25, 2019, The New York Times Magazine listed Jimmy Dorsey among hundreds of artists whose material was reportedly destroyed in the 2008 Universal fire.[17]

Jimmy Dorsey's recordings were posthumously inducted into the Grammy Hall of Fame, which is a special Grammy award established in 1973 to honor recordings that are at least 25 years old and that have "qualitative or historical significance."