Jones was born in Coalton, Ohio to a musical and mining family. His father, Richard Isham Jones (1865-1945), was a violinist.[2][3] The family moved to Saginaw, Michigan where Jones grew up and started his first ensemble for church concerts.[4] In 1911 one of Jones's earliest compositions "On the Alamo" was published by Tell Taylor Inc. (Taylor had formed a publishing company the year before when his song "Down by the Old Mill Stream" became a hit.)[5]

In 1915 Jones moved to Chicago, Illinois. He performed at the Green Mill Gardens, then began playing at Fred Mann's Rainbo Gardens.[6] Chicago remained his home until 1932, when he settled in New York City. He also toured England with his orchestra in 1925.[7] 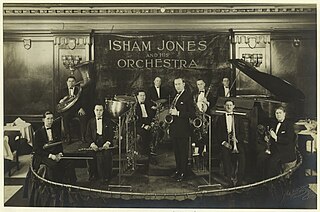 In 1917, he composed the tune "We're In The Army Now" (also known as "You're In the Army Now") when the United States entered World War I. The same tune was popular during World War II and it is played by the U.S. Army Band.[citation needed]

The Isham Jones band made a series of popular gramophone records for Brunswick throughout the 1920s. His first 26 sides, made at Rainbo Gardens, were credited to "Isham Jones' Rainbo Orchestra".[8] By the end of 1920, the name was simply "Isham Jones' Orchestra".[9]

He led one of the most popular dance bands in the 1920s and 1930s. His first successful recording, "Wabash Blues" written by and , was recorded in 1921 by "Isham Jones and his Orchestra". This million-seller stayed for twelve weeks in the U.S. charts, six at No. 1.[10] It was awarded a gold disc by the RIAA.[11] Noted musicians who played in Jones's band included , Benny Goodman (although no records were made during the short time he was there), Woody Herman, Walt Yoder, and Roy Bargy. Reed virtuoso Al Gallodoro appeared briefly with Jones in 1933, taking part in a record date October 3.[12]

From the start, his Brunswick records were popular. There was a gap from October 1927 to June 1929 where Jones did not record due to disbanding and reorganization.[citation needed]

From 1929 to 1932, his Brunswick recordings became even more sophisticated with offbeat arrangements by Gordon Jenkins and others; Jones was his own arranger early on, but cultivated others. During this period, Jones started featuring violinist Eddie Stone as one of his regular vocalists. Stone had an unusual, almost humorous tone to his voice. His other vocalists included Frank Sylvano, Billy Scott, and Arthur Jarrett. In 1932, he added Joe Martin, another of the band's violinists, as a frequent vocalist. In April that year, young Bing Crosby recorded two sessions with Jones's group which included "Sweet Georgia Brown". Crosby at this point in his career was still singing in a jazz idiom, transitioning to his better known "crooner" style.[citation needed]

In August 1932, Jones signed with Victor, and these records are considered among the best arranged and performed commercial dance band records of the Depression era. Victor's recording technique was suited to Jones' band. In October 1932, he teamed up with the Three X Sisters in New York who had just departed from CBS radio. They recorded "experimental" songs for RCA Victor in which Jones began to fuse jazz and early swing music. They recorded "Where? (I Wonder Where?)" and "What Would Happen to Me If Something Happened to You." His Victor releases had an almost symphonic sound, often with a strong use of tuba. During his Victor period, he recorded two long playing "Program Transcription" records as part of Victor's unsuccessful 33 1/3 RPM series. He stayed with Victor until July 1934, when he signed with Decca. Jones's recordings during this period rivaled Paul Whiteman, Waring's Pennsylvanians, Leo Reisman and other dance orchestras as examples of the most popular dance music of the era.[citation needed]

Jones' Decca recordings are often unfavorably compared to his Victor recordings, due to Decca's recording techniques, Decca's insisting that Jones re-record many of his Victor recordings, and the apparent smaller size of his orchestra. After he left Decca in 1936, he again retired and his orchestra was taken over by band member Woody Herman. Jones started a new band in 1937–38 and recorded a handful of sessions under the ARC labels: Melotone, Perfect and Banner.[citation needed]

In the 1940s, Jones resided on his poultry farm in Colorado, which he occasionally left for short tours with pickup bands. He later resided in Los Angeles. He moved to Hollywood, Florida in 1955, and died there of cancer in 1956.[13] (He is interred at Forest Lawn Memorial Park in Glendale, California, and perhaps for that reason is often erroneously listed as having died in Hollywood, California.)[citation needed]

His great-nephew is the now-deceased jazz drummer Rusty Jones.[citation needed]

Isham Jones' compositions (he wrote the music, Charles Newman and Gus Kahn were among his lyricists):

During the 1920s, Isham Jones had several number one records on the pop charts in the U.S.: