View Related Artists
American composer of popular music
Not to be confused with Harold Arlin.

Harold Arlen (born Hyman Arluck; February 15, 1905 – April 23, 1986) was an American composer of popular music,[2] who composed over 500 songs, a number of which have become known worldwide. In addition to composing the songs for the 1939 film The Wizard of Oz (lyrics by Yip Harburg), including "Over the Rainbow", Arlen is a highly regarded contributor to the Great American Songbook. "Over the Rainbow" was voted the 20th century's No. 1 song by the Recording Industry Association of America (RIAA) and the National Endowment for the Arts (NEA).[3][4]

Arlen was born in Buffalo, New York, the child of a Jewish cantor.[2] His twin brother died the next day. He learned to play the piano as a youth, and formed a band as a young man. He achieved some local success as a pianist and singer before moving to New York City in his early twenties, where he worked as an accompanist in vaudeville[5] and changed his name to Harold Arlen. Between 1926 and about 1934, Arlen appeared occasionally as a band vocalist on records by The Buffalodians, Red Nichols, Joe Venuti, Leo Reisman, and Eddie Duchin, usually singing his own compositions.

In 1929, Arlen composed his first well-known song: "Get Happy" (with lyrics by Ted Koehler).[2] Throughout the early and mid-1930s, Arlen and Koehler wrote shows for the Cotton Club, a popular Harlem night club, as well as for Broadway musicals and Hollywood films.[2] Arlen and Koehler's partnership resulted in a number of hit songs, including the familiar standards "Let's Fall in Love" and "Stormy Weather".[2] Arlen continued to perform as a pianist and vocalist with some success, most notably on records with Leo Reisman's society dance orchestra.

In the mid-1930s, Arlen married, and spent increasing time in California, writing for movie musicals. It was at this time that he began working with lyricist E. Y. "Yip" Harburg.[2] In 1938, the team was hired by Metro-Goldwyn-Mayer to compose songs for The Wizard of Oz,[2] the most famous of which is "Over the Rainbow", for which they won the Academy Award for Best Music, Original Song. They also wrote "Down with Love" (featured in the 1937 Broadway show Hooray for What!), "Lydia the Tattooed Lady", for Groucho Marx in At the Circus in 1939, and "Happiness is a Thing Called Joe", for Ethel Waters in the 1943 movie Cabin in the Sky.[2]

Arlen was a longtime friend and onetime roommate of actor Ray Bolger, who starred in The Wizard of Oz.

In the 1940s, he teamed up with lyricist Johnny Mercer, and continued to write hit songs like "Blues in the Night", "Out of this World", "That Old Black Magic", "Ac-Cent-Tchu-Ate the Positive", "Any Place I Hang My Hat Is Home", "Come Rain or Come Shine" and "One for My Baby (and One More for the Road)".[2]

Arlen composed two of the defining songs of Judy Garland's career: "Over the Rainbow" and "The Man That Got Away", the last written for the 1954 version of the film A Star Is Born.[2] At her famous 1961 Carnegie Hall concert, after finishing a set of his songs, Garland acknowledged Arlen in the audience and invited him to receive an ovation.

Arlen recorded his debut album as a vocalist, Harold Sings Arlen (With Friend), in 1966. Barbra Streisand accompanied him on two songs.[6]

Arlen and Anya Taranda married on January 6, 1937, over the objection of their parents, because she was a Gentile and he was Jewish, but it turned out to be a successful marriage. In 1951, Anya was institutionalized for seven years and died from a brain tumor in 1970.[7] Arlen never remarried and died on April 23, 1986 of cancer at his Manhattan apartment at the age of eighty-one.[8][7] Arlen is buried next to his wife at the Ferncliff Cemetery in Hartsdale, New York. After his death, Irving Berlin summed up his life at a tribute, saying: "He wasn't as well known as some of us, but he was a better songwriter than most of us and he will be missed by all of us."[9]

Shortly before his death, Arlen adopted the 22 year old adult son of his brother Julius "Jerry" Arluck, so that his estate would have an heir in order to extend his copyright. Samuel Arlen runs the company that owns the rights to the Arlen catalog. 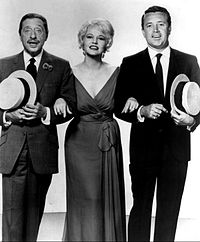 Arlen performs with Peggy Lee and Vic Damone in 1961