Lombardo formed the Royal Canadians in 1924 with his brothers Carmen, Lebert and Victor, and other musicians from his hometown. They billed themselves as creating "the sweetest music this side of Heaven." The Lombardos are believed to have sold between 100 and 300 million records during their lifetimes,[1] many featuring the band's lead singer from 1940 onward, Kenny Gardner.[2]

Lombardo was born in London, Ontario,[3] to Italian immigrants Gaetano Alberto and Angelina Lombardo. His father, who had worked as a tailor, was an amateur singer with a baritone voice and had four of his five sons learn to play instruments so they could accompany him. Lombardo and his brothers formed their first orchestra while still in grammar school and rehearsed in the back of their father's tailor shop.[4] Lombardo first performed in public with his brother Carmen at a church lawn party in London in 1914.[5] His first recording session took place where cornetist Bix Beiderbecke made his legendary recordings—in Richmond, Indiana, at the Gennett Studios—both during early 1924.[citation needed] 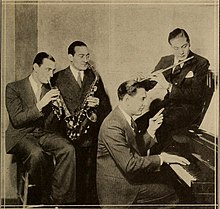 The Lombardo brothers: Lebert, Carmen, Guy, and Victor, circa 1931

Although Lombardo's "sweet" big-band music was viewed by some in the jazz and big-band community of the day as "boring, mainstream pap," trumpeter Louis Armstrong regularly named Lombardo's band his favorite orchestra.[7][8] 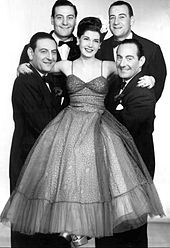 Lombardo is remembered for almost a half-century of New Year's Eve big band remotes, first on radio, then on television. His orchestra played at the Roosevelt Grill in the Roosevelt Hotel in New York City from 1929 ("radio's first nationwide New Year's Eve broadcast" which popularized Auld Lang Syne)[3] to 1959, and from then until 1976 at the Waldorf Astoria Hotel. Live broadcasts (and later telecasts) of their performances were a large part of New Year's celebrations across North America; millions of people watched the show with friends at house parties. Because of this popularity, Lombardo was called "Mr. New Year's Eve".

The band's first New Year's Eve radio broadcast was in 1928; within a few years, they were heard live on the CBS Radio Network before midnight Eastern Time, then on the NBC Radio Network after midnight.

On December 31, 1956, the Lombardo band did their first New Year's TV special on CBS; the program (and Lombardo's 20 subsequent New Year's Eve TV shows) included a live segment from Times Square. Although CBS carried most of the Lombardo New Year's specials, from 1965 to 1970, the special was syndicated live to individual TV stations instead of broadcast on a network. By the middle 1970s, the Lombardo TV show was facing competition, especially for younger viewers, from Dick Clark's New Year's Rockin' Eve, but Lombardo remained famous among viewers, especially older ones.

Even after Lombardo's death, the band's New Year's specials continued for two more years on CBS. The Royal Canadians' recording of the traditional song "Auld Lang Syne" still plays as the first song of the new year in Times Square followed by "Theme from New York, New York" by Frank Sinatra, "America the Beautiful" by Ray Charles, "What a Wonderful World" by Louis Armstrong, and "Over the Rainbow" by Israel Kamakawiwoʻole.[9]

Also Guy Lombardo played himself in the hit series Route 66 in Season 3 Episode 28 in “But What Do You Do in March?”

Lombardo and his orchestra were part of the 1934 film Many Happy Returns.[11] and he also made a cameo appearance in the 1970 film The Phynx. Clips of his own show appeared in the 1977 film Looking for Mr. Goodbar starring Diane Keaton.

Lombardo was also an important figure in Step Boat speedboat racing, winning the Gold Cup in 1946 in his record-breaking speedboat, Tempo VI, designed and built by John L. Hacker. He then went on to win the Ford Memorial competition in 1948 and the President's Cup and the Silver Cup in 1952. From 1946 to 1949, Lombardo was the reigning U.S. national champion. Before his retirement from the sport in the late 1950s, he had won every trophy in the field. In 1959 Lombardo was attempting a run on the absolute water speed record with the jet engine-powered Tempo Alcoa when it was destroyed on a radio-controlled test run doing over 250 miles per hour (400 km/h).[12] After the destruction of the Tempo Alcoa, Lombardo retired from hydroplane racing. In 2002 he was inducted into the Canadian Motorsport Hall of Fame for his accomplishments.

Beginning in 1958, Lombardo endorsed the Guy Lombardo Royal Fleet, a line of fiberglass boats manufactured and sold by the United States Boat Corporation of Newark, New Jersey, a division of U.S. Pools Corporation. The boats were manufactured under license from Skagit Plastics of La Conner, Washington. The endeavor was short-lived and ended in 1961 with the closure of Skagit Plastics.[13][better source needed]

In his later years, Lombardo lived in Freeport, Long Island, New York, where he kept Tempo, Tempo VI, and Tempo VII (built in 1955). He invested in a nearby seafood restaurant called "Liota's East Point House" that eventually became "Guy Lombardo's East Point House". Lombardo became a promoter and musical director of Jones Beach Marine Theater. The venue was built with him in mind by Robert Moses, a fan of Lombardo. One of Lombardo's productions at Jones Beach was Paradise Island in 1961. His final production there was the 1977 staging of Finian's Rainbow with Christopher Hewett in the title role.

On November 5, 1977, Lombardo died of a heart attack. Another source says he died "of a lung ailment."[14] His wife, who died in 1982, was at his bedside when he died in Houston Methodist Hospital.[14] He's interred at the Pinelawn Memorial Park in East Farmingdale, NY.

Victor Lombardo took over the band briefly but could not maintain it. When Lebert Lombardo severed his ties in 1979, the group dissolved. The orchestra was later revived in 1989 by Al Pierson, playing a mix of nostalgic tunes and modern arrangements. 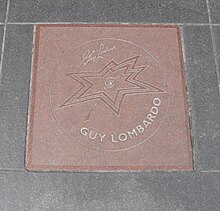 Guy Lombardo's star on Canada's Walk of Fame in Toronto

Lombardo was featured on a postage stamp issued on December 17, 1999, as part of Canada Post's Millennium Collection.[15][16]

Guy Lombardo has three stars on the Hollywood Walk of Fame in Los Angeles.[17][18]

The home where Guy Lombardo and his siblings grew up is still standing in London, Ontario, at 202 Simcoe Street. A plaque to the Lombardos has been moved from the exterior wall of the Labatt Retail Store at Richmond and Horton streets in London to the store's entranceway off the parking lot, denoting the site of a subsequent home of the Lombardos.

In his later home of Freeport, New York, there is Guy Lombardo Avenue. There is a bridge named after Lombardo in London, Ontario near Wonderland Gardens, as well as Lombardo Avenue in north London near the University of Western Ontario.

The Guy Lombardo Society is dedicated to preserving the music and history of Guy Lombardo and His Royal Canadians.

Guy Lombardo was among hundreds of artists whose material was destroyed in the 2008 Universal fire.[19]

Lebert Lombardo's children also have an extensive collection of artifacts, including photographs, record albums, sheet music, awards, and the band's framed first paycheck from 1918 in their homes and storage units in Fort Myers and Sanibel, Florida. They have tried to donate the collection to various universities and museums but have had no takers. The Library of Congress has a collection of Lombardo films.[18]

Before the start of Billboard magazine's top 40 charts in 1940, Lombardo had over 140 hits from 1927–1940, including twenty-one No. 1 singles. The five biggest were going "Charmaine", "It Looks Like Rain in Cherry Blossom Lane", "Boo-Hoo", "We Just Couldn't Say Goodbye", and "Red Sails in the Sunset."

The following appeared on the Columbia Records label:

The following appeared on the Brunswick Records label:

The following appeared on the Decca Records label: