Eugene Bertram Krupa (January 15, 1909 – October 16, 1973)[1] was an American jazz drummer, bandleader and composer known for his energetic style and showmanship.[2][3] His drum solo on Benny Goodman's 1937 recording of "Sing, Sing, Sing" elevated the role of the drummer from an accompanying line to an important solo voice in the band.

In collaboration with the Slingerland drum and Zildjian cymbal manufacturers, he was a major force in defining the standard band drummer's kit. Krupa is considered "the founding father of the modern drumset" by Modern Drummer magazine.[4]

The youngest of Anna (née Oslowski) and Bartłomiej Krupa's nine children, Gene Krupa was born in Chicago, Illinois, United States. Bartłomiej was an immigrant from Poland born in the village of Łęki Górne, Podkarpackie in Southeastern Poland. Anna was born in Shamokin, Pennsylvania, and was also of Polish descent. His parents were Roman Catholics who groomed him for the priesthood. He spent his grammar school days at parochial schools. He attended the James H. Bowen High School on Chicago's southeast side. After graduation he attended Saint Joseph's College for a year but decided the priesthood was not his vocation.[1]

Krupa studied with Sanford A. Moeller, and began playing drums professionally in the mid-1920s with bands in Wisconsin. In 1927, he was hired by MCA to become a member of Thelma Terry and Her Playboys,[1] the first notable American jazz band to be led by a female musician (except all-female bands).[citation needed] The Playboys were the house band at the Golden Pumpkin nightclub in Chicago and toured throughout the eastern and central United States. 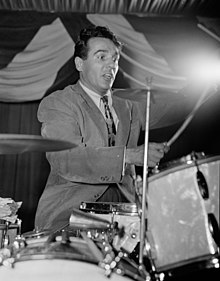 Krupa made his first recordings in 1927 with a band under the leadership of Red McKenzie and guitarist Eddie Condon.[1] Along with other recordings by musicians from the Chicago jazz scene, such as Bix Beiderbecke, these recordings are examples of Chicago style jazz. Krupa's influences during this time included Father Ildefonse Rapp and Roy Knapp (both teachers of his), and drummers Tubby Hall, Zutty Singleton and Baby Dodds.[1] Press rolls (dragging one stick across the snare head while keeping the beat with the other stick) were a fairly common technique in the early stages of his development. There were many other drummers (Ray Bauduc, Chick Webb, George Wettling, Dave Tough) who influenced his approach to drumming and other instrumentalists and composers such as Frederick Delius who influenced his approach to music.[5]

Krupa appeared on six recordings by the Thelma Terry band in 1928. In December 1934, he joined Benny Goodman's band, where his drum work made him a national celebrity.[1] His tom-tom interludes on the hit "Sing, Sing, Sing" were the first extended drum solos to be recorded commercially.[6] But conflict with Goodman prompted him to leave the group and form his own orchestra shortly after the Carnegie Hall concert in January 1938.[1] He appeared in the 1941 film Ball of Fire, in which he and his band performed an extended version of the hit "Drum Boogie" (composed by Krupa and Roy Eldridge), sung by Martha Tilton and lip-synced by Barbara Stanwyck.

In 1943, Krupa was arrested on a trumped-up drug charge.[2][7] This resulted in a short jail sentence and bad publicity. Krupa broke up the orchestra and returned to Goodman's band for a few months.[1] When Goodman wanted him to go on a west coast tour, Krupa declined.[1] He then joined Tommy Dorsey's band for several months and then put together his next orchestra.[1]

As the 1940s ended, Count Basie closed his band and Woody Herman reduced his band to an octet. In 1951, Krupa cut down the size of his band to a ten-piece for a short while and from 1952 on he led trios, then quartets, often with Charlie Ventura then Eddie Shu on tenor sax, clarinet, and harmonica. He appeared regularly in the Jazz at the Philharmonic concerts.[1] In the 1950s, Krupa returned to Hollywood to appear in the films The Glenn Miller Story and The Benny Goodman Story. In 1959, the movie biography The Gene Krupa Story was released; Sal Mineo portrayed Krupa, and the film included cameos by Anita O'Day and Red Nichols.[5] During the 1950s and 1960s, Krupa often played at the Metropole near Times Square in Manhattan. He continued to perform in famous clubs in the 1960s, including the Showboat Lounge in northwest Washington, D.C. With peer Cozy Cole, Gene started a music school in 1954 that carried on into the 1960s.[1] Some of the school's students included Peter Criss of KISS and Jerry Nolan of The New York Dolls. Doug Clifford of Creedence Clearwater Revival cited Krupa as an inspiration.

His compositions which he wrote or co-wrote included "Some Like It Hot" in 1939, "Drum Boogie", "Boogie Blues", his theme song "Apurksody", "Ball of Fire", "Disc Jockey Jump" with Gerry Mulligan, "Wire Brush Stomp", "Hippdeebip", "Krupa's Wail", "Swing is Hee", "Quit and Roll 'Em" with Sam Donahue, and "How 'Bout This Mess".

Norman Granz hired Krupa and drummer Buddy Rich for his Jazz at the Philharmonic concerts. The two drummers performed at Carnegie Hall in September 1952 and it was issued by Verve as The Drum Battle. The two drummers faced off in a number of television broadcasts and other venues and often played similar duets with drummer Cozy Cole. Krupa and Rich recorded two studio albums together: Krupa and Rich (Verve, 1955) and Burnin' Beat (Verve, 1962).

Krupa married Ethel Maguire twice: the first marriage lasted from 1934 to 1942, the second from 1946 to her death in 1955. He remarried in 1959 to Patty Bowler and they were divorced within ten years.

In the early 1970s, Krupa's house in Yonkers, New York, was damaged by fire.[8] He continued to live in the parts of the house that were habitable.

In 1973, Krupa died in Yonkers at the age 64 from heart failure, though he also had leukemia and emphysema.[9] He is buried in Holy Cross Cemetery in Calumet City, Illinois.

In the 1930s, Krupa became the first endorser of Slingerland drums. At Krupa's urging, Slingerland developed tom-toms with tuneable top and bottom heads, which immediately became important elements of virtually every drummer's setup. Krupa developed and popularized many of the cymbal techniques that became standard. His collaboration with Avedis Zildjian developed the modern hi-hat cymbals and standardized the names and uses of the ride cymbal, crash cymbal and splash cymbal. He is also credited with helping to formulate the modern drum set, being one of the first jazz drummers to use a bass drum in a recording session (December 1927).[7] One of his bass drums, a Slingerland 14 X 26, inscribed with Benny Goodman's and Krupa's initials, is preserved at the Smithsonian Institution in Washington, D.C.[10]

In 1978, Krupa became the first drummer inducted into the Modern Drummer Hall of Fame. The 1937 recording of Louis Prima's "Sing, Sing, Sing (With a Swing)" combined with Waller's "Christopher Columbus" by Benny Goodman and His Orchestra featuring Krupa on drums was inducted into the Grammy Hall of Fame in 1982.