Severinsen was born in Arlington, Oregon, to Minnie Mae (1897–1998) and Carl Severinsen (1898–1972).[1] He was nicknamed Doc after his father, the only dentist in Arlington, who was born in Germany to a Danish father and a Swiss mother. Severinsen's father played violin and wanted him to play it as well, but Severinsen wanted to play trombone.[2] Because his arms were not long enough for trombone,[3] and the small Arlington music store had none available, he settled for the cornet. A neighbor gave him some help on how to play, while his father, tobacco in mouth, instructed him to spit out the notes like spitting tobacco. His mother threatened to spank him if he didn't practice.[4]

Severinsen proved to have a knack for the instrument, and was in a high school band when he was seven. At nine, he won a state trumpet contest, at thirteen, he joined a multi-state all-star band, and at fourteen he auditioned for Tommy Dorsey but wasn't hired. He started a quartet called the Blue Notes that performed at local dances.[4]

Before graduating from high school, he was hired to go on the road with the Ted Fio Rito Orchestra.[4] After graduation, he went on tour with Charlie Barnet, Tommy Dorsey, and Benny Goodman.[2] He served in the Army during World War II.[5] In 1946, he played trumpet on radio station KODL.[6]

In 1949, Severinsen landed a job as a studio musician for NBC, where he accompanied Steve Allen, Eddie Fisher, Dinah Shore, and Kate Smith, and was a member of the original band for Tonight Starring Steve Allen, and was the soloist playing the closing theme. He left the show with Allen in 1957. [4] The leader of The Tonight Show Band, Skitch Henderson, asked him to return as first-chair trumpeter in 1962 for what had become The Tonight Show Starring Johnny Carson, and five years later Severinsen was leading the band.[5]

Under Severinsen's direction, The Tonight Show Band, styled the NBC Orchestra, became a well-known big band in America.[7] Severinsen became one of the most popular bandleaders, appearing almost every night on television. He led the band during commercials and while guests were introduced. He joked with Johnny Carson, the show's host, and developed an amusing habit of wearing gaudy clothing.[2]

The show introduced a comic "Stump the Band" segment in which audience members called out the titles of obscure songs to see if the band could play them. Severinsen often cried "key of E", his signal for the band to strike up a western theme, and then he would enthusiastically sing a country music-flavored nonsense song.

Severinsen substituted for Ed McMahon on occasions when Ed was absent as Carson's announcer and sidekick. He typically assumed this role when the show featured a guest host, which became increasingly frequent during the program's later years. Tommy Newsom was usually the band's substitute director when Severinsen was away from the show or filling in for McMahon. The sidekick role was omitted from the show when Leno guest hosted (it was discontinued altogether after Leno replaced Carson on a full-time basis). While Leno guest hosted for Carson, Severinsen typically introduced the guest host and led the band while interacting with Leno in a similar manner to his interactions with Carson and McMahon.

Severinsen continued as bandleader until Carson's retirement in 1992. He appeared on Jimmy Fallon's Tonight Show in February 2015 when the show traveled to Los Angeles for a week. He played for the evening with The Roots. The appearance helped to promote his nationwide tour.

During the early 1960s, Severinsen began recording big band albums, then moved toward instrumental pop music by the end of the decade. In the 1970s he recorded jazz funk, then disco, finding hits with "Night Journey" and "I Wanna Be With You". He released an album with the jazz fusion group Xebron in 1985. During the next year, he recorded The Tonight Show Band with Doc Severinsen which won the Grammy Award for Best Large Jazz Ensemble Performance. After Carson retired in 1992, he toured with some of the band's members, including Conte Candoli, Snooky Young, Bill Perkins, Ernie Watts, Ross Tompkins, and Ed Shaughnessy.[2]

He performed the "Star-Spangled Banner" on at least three nationally telecast occasions; however, the first two renditions were marred by problems. When he accompanied actor Pat O'Brien, as O'Brien recited the National Anthem at Super Bowl IV, the public address system at Tulane Stadium went dead for a minute, although viewers were unaware of it. Fifteen years later, when he performed the anthem again prior to the Marvin Hagler vs. Thomas Hearns fight, a giant American flag on the side of the Fantasy Tower at Caesar's Palace overlooking the outdoor ring was not unfurled properly due to problems with the roping. He performed the anthem again, as well as "O Canada", at the 1989 Major League Baseball All-Star Game in Anaheim, California. With the game being played in the Los Angeles television and radio market, he was accompanied by the Tonight Show band. As of 2020, Severinsen and the NBC Orchestra's performance remains the most recent non-vocal rendition of the national anthem at the Midsummer Classic.

Severinsen is credited for co-writing the hit song "Stop and Smell the Roses" with Mac Davis, although both parties agree that Severinsen only came up with the title.[11] 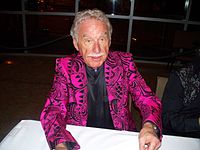 Severinsen was the principal pops conductor for several American orchestras during and after his time on The Tonight Show. His first was with the Phoenix Symphony in 1983.[12] He held similar positions with the Buffalo Philharmonic Orchestra, Milwaukee Symphony Orchestra, and Minnesota Orchestra.[2]

He retired from conducting in 2007 and was named Pops Conductor Emeritus in Milwaukee[13] and Pops Conductor Laureate in Minnesota.[14] Severinsen was also named Distinguished Visiting Professor of Music and Katherine K. Herberger Heritage Chair for Visiting Artists at Arizona State University School of Music in 2001 and 2002.[15]

In 2014, he was inducted into the Scandinavian-American Hall of Fame.[16] 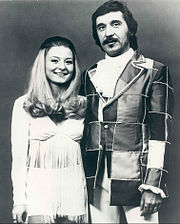 Severinsen with daughter Nancy, in 1974. Nancy was part of a vocal group called "Today's Children" which often performed with him.

Severinsen's children are Nancy, Cindy, Allen, Robin, and Judy. He has eight grandchildren, including Blaire and Gray Reinhard, who write and perform roots rock music together in various incarnations as Curtis & Reinhard and the Blaire Reinhard Band.[17] Severinsen has been quoted as saying that he has been married four times.[18] His third wife, Emily Marshall, was a television writer and producer, and is an on-camera subject in a PBS documentary produced by American Masters titled, Never Too Late: The Doc Severinsen Story, that premiered April 2, 2021.[19][20] They met when she was working as a secretary for The Tonight Show producer Fred de Cordova.[21] His current partner, Cathy Leach, is a professor emeritus of trumpet at the University of Tennessee.[19]

With Skitch Henderson and "The Tonight Show" Orchestra