American jazz singer and bandleader
This article is about the musician. For the school, see Cab Calloway School of the Arts.

Cabell "Cab" Calloway III (December 25, 1907 – November 18, 1994) was an American jazz singer, dancer, and bandleader. He was associated with the Cotton Club in Harlem, New York City, where he was a regular performer.

Calloway was a master of energetic scat singing and led one of the United States' most popular big bands from the start of the 1930s to the late 1940s. Calloway's band included trumpeters Dizzy Gillespie and Adolphus "Doc" Cheatham, saxophonists Ben Webster and Leon "Chu" Berry, New Orleans guitarist Danny Barker, and bassist Milt Hinton.

Calloway had several hits in the 1930s–1940s, becoming known as the "Hi-de-ho" man of jazz for his most famous song, "Minnie the Moocher", recorded in 1931. He also made several stage, film, and television appearances until his death in 1994 at the age of 86. He influenced later singers such as Michael Jackson and various hip-hop performers.[1] Calloway was the first African American musician to sell a million records from a single song and to have a nationally syndicated radio show.[2] He is in the Grammy Hall of Fame and received the Grammy Lifetime Achievement Award.

There was latter interest in 1980 when he appeared in The Blues Brothers film.

Calloway was born in Rochester, New York, on Christmas Day in 1907 to an African American[3] family. His mother, Martha Eulalia Reed, was a Morgan State College graduate, teacher, and church organist. His father, Cabell Calloway Jr., graduated from Lincoln University of Pennsylvania[4] in 1898,[5] and worked as a lawyer and in real estate. The family moved to Baltimore, Maryland, when Calloway was 11.[6] Calloway grew up in the Druid Hill neighborhood of West Baltimore.

He began private voice lessons in 1922 and studied music and voice throughout his formal schooling. Despite his parents' and teachers' disapproval of jazz, he began performing nightclubs in Baltimore. His mentors included drummer Chick Webb and pianist Johnny Jones.

Calloway attended Frederick Douglass High School and played basketball at the guard position for the high school and professional Baltimore Athenians team.[7] He graduated in 1925.[6][8]

After graduation, Calloway joined his older sister, Blanche, in a tour of the popular black musical revue Plantation Days. Blanche Calloway became an accomplished bandleader before her brother, and he would often credit her as his inspiration for entering show business.

His parents wanted him to be a lawyer, like his father, so he enrolled at Crane College in Chicago, but he was more interested in singing and entertaining. He spent most of his nights at the Dreamland Ballroom, the Sunset Cafe, and the Club Berlin, performing as a singer, drummer, and master of ceremonies. At the Sunset Café, he was an understudy for singer Adelaide Hall. Here he met and performed with Louis Armstrong, who taught him to sing in the scat style. He left school to sing with the Alabamians band.[9] He also performed at Baltimore's old Royal Theatre.[10] 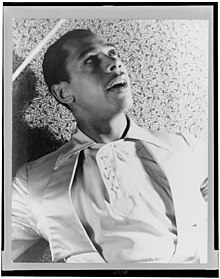 In 1930, Calloway led the band The Missourians, which became known as Cab Calloway and His Orchestra. At the Cotton Club in Harlem, New York, the band was hired in 1931 to substitute for the Duke Ellington Orchestra while it was touring. The band's popularity led to sharing the role of house band with Ellington. The band performed twice a week for radio broadcasts on NBC. Calloway appeared on radio programs with Walter Winchell and Bing Crosby and was the first African American to have a nationally syndicated radio show.[2]

In 1931, Calloway recorded his most famous song, "Minnie the Moocher". It is the first single song by an African American to sell a million records.[2] "The Old Man of the Mountain", "St. James Infirmary Blues", and "Minnie the Moocher" were performed in the cartoons The Old Man of the Mountain (1933), Snow White (1933), and Minnie the Moocher (1932), respectively. Through rotoscoping, Calloway performed voiceover for these cartoons, but his dance steps were the basis of the characters' movements. He scheduled concerts in some communities to coincide with the release of the films to take advantage of the publicity.

As a result of the success of "Minnie the Moocher", Calloway became identified with its chorus, gaining the nickname "The Hi De Ho Man".[11] He performed in the 1930s in a series of short films for Paramount. (Calloway's and Ellington's groups were featured on film more than any other jazz orchestras of the era.) In these films, Calloway can be seen performing a gliding backstep dance move, which some observers have described as the precursor to Michael Jackson's moonwalk. Calloway said 50 years later, "it was called The Buzz back then."[12] The 1933 film International House featured Calloway performing his classic song, "Reefer Man", a tune about a man who favors marijuana cigarettes.[13]

Calloway made his "first proper Hollywood movie appearance" opposite Al Jolson in The Singing Kid in 1936. He sang several duets with Jolson, and the film included Calloway's band and cast of 22 Cotton Club dancers from New York.[14] According to film critic Arthur Knight, the creators of the film intended to "erase and celebrate boundaries and differences, including most emphatically the color line...when Calloway begins singing in his characteristic style – in which the words are tools for exploring rhythm and stretching melody – it becomes clear that American culture is changing around Jolson and with (and through) Calloway".[15][16]:watch

Calloway's band recorded for Brunswick and the ARC dime store labels (Banner, Cameo, Conqueror, Perfect, Melotone, Banner, Oriole) from 1930 to 1932, when he signed with RCA Victor for a year. He returned to Brunswick in late 1934 through 1936, then with Variety, run by his manager, Irving Mills. He remained with Mills when the label collapsed during the Depression. Their sessions were continued by Vocalion through 1939 and OKeh through 1942. After an AFM recording ban due to the 1942–44 musicians' strike ended, Calloway continued to record.

In 1941, Calloway fired Dizzy Gillespie from his orchestra after an onstage fracas erupted when Calloway was hit with spitballs. He wrongly accused Gillespie, who stabbed Calloway in the leg with a small knife.[17]

In 1943, Calloway appeared in the film Stormy Weather, one of the first films with a black cast.[18]

In the late 1940s, Calloway wrote a humorous pseudo-gossip column called "Coastin' with Cab" for Song Hits magazine. It was a collection of celebrity snippets such as the following in the May 1946 issue: "Benny Goodman was dining at Ciro's steak house in New York when a very homely girl entered. 'If her face is her fortune,' Benny quipped, 'she'd be tax-free'." In the late 1940s, however, Calloway's bad financial decisions and his gambling caused his band to break up.[9] 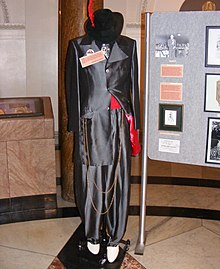 One of Cab Calloway's zoot suits on display in Baltimore's City Hall, October 2007

During the late 1940s, Calloway lived with his wife Zulme "Nuffie" and family in Long Beach on the South Shore of Long Island, New York on the border with neighboring Lido Beach. In the 1950s, Calloway moved his family to Westchester County, New York, where he and Nuffie raised their daughters Chris, Cecelia (Lael), and Cabella Calloway.

In 1952, he played the prominent role of "Sportin' Life" in a production of Porgy and Bess with William Warfield and Leontyne Price as the title characters. Another notable role was "Yeller" in The Cincinnati Kid (1965) with Steve McQueen, Ann-Margret, and Edward G. Robinson.

Calloway appeared on The Ed Sullivan Show on March 19, 1967, with his daughter Chris Calloway.[21] In 1967, he co-starred with Pearl Bailey as Horace Vandergelder in an all-black cast of Hello, Dolly! on Broadway during its original run. Chris Calloway also joined the cast as Minnie Fay.[22] The new cast revived the flagging business for the show[23] and RCA Victor released a new cast recording, rare for the time. In 1973–74, Calloway was featured in an unsuccessful Broadway revival of The Pajama Game with Hal Linden and Barbara McNair.

His autobiography, Of Minnie the Moocher and Me was published in 1976. It included his complete Hepster's Dictionary as an appendix. Renewed interest in Calloway occurred in 1980 when he appeared in the film The Blues Brothers performing "Minnie the Moocher".

A performance with the Cincinnati Pops Orchestra directed by Erich Kunzel in August 1988 was recorded on video and features a classic presentation of "Minnie the Moocher", 57 years after he first recorded it.[24]

In 1985, Calloway and his Orchestra appeared at The Ritz London Hotel where he was filmed for a 60-minute BBC TV show called The Cotton Club Comes to the Ritz. Adelaide Hall, Doc Cheatham, Max Roach, and the Nicholas Brothers also appeared on the bill.[25][26]

On June 12, 1994, Calloway suffered a stroke. He died five months later on November 18, 1994, at age 86, in a Delaware nursing home.[11] Music critics have written of his influence on later generations of musicians, such as Michael Jackson, as well as present-day hip-hop performers.[1] On June 25, 2019, The New York Times Magazine listed Cab Calloway among hundreds of artists whose material was reportedly destroyed in the 2008 Universal fire.[27] 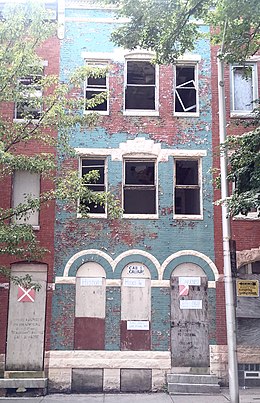 Preservation of Calloway's boyhood home at 2216 Druid Hill Avenue in Baltimore as a significant artifact of African-American cultural heritage is being urged by his family and the National Trust for Historic Preservation. It was disclosed in 2019 that demolition of the abandoned structure, along with the rest of the block, is planned for the creation of a park to be named Cab Calloway Square in his honor.[10][28] Although the block is designated "historically significant" on the National Register of Historic Places, Baltimore City officials said at a hearing on July 9, 2019, that there is "extensive structural damage" to the Calloway house as well as adjacent ones.[29] The Commission on Historical and Architectural Preservation's executive director, however, said that properties in worse condition than the Calloway House have been restored with financial support from a city tax credit program. Maryland Governor Larry Hogan has urged that demolition of the Calloway House be forestalled for its potential preservation as a historic house museum akin to the Louis Armstrong House in New York.[2][29] Design options for the planned Cab Calloway Square may include an archway from the facade (pictured) as part of the Square's entrance, it was proposed by architects working with Baltimore City and the Druid Heights Community Development group responsible for the block's redevelopment.[30]

Calloway, Cab and Rollins, Bryant. Of Minnie the Moocher and Me. TY Crowell, New York City, 1976.