William Thomas Strayhorn (November 29, 1915 – May 31, 1967) was an American jazz composer, pianist, lyricist, and arranger, best remembered for his long-time collaboration with bandleader and composer Duke Ellington that lasted nearly three decades. His compositions include "Take the 'A' Train", "Chelsea Bridge", "A Flower Is a Lovesome Thing", and "Lush Life".

Strayhorn was born in Dayton, Ohio. His family soon moved to the Homewood section of Pittsburgh, Pennsylvania. However, his mother's family was from Hillsborough, North Carolina, and she sent him there to protect him from his father's drunken sprees. Strayhorn spent many months of his childhood at his grandparents' house in Hillsborough. In an interview, Strayhorn said that his grandmother was his primary influence during the first ten years of his life. He first became interested in music while living with her, playing hymns on her piano, and playing records on her Victrola record player.[1]

Return to Pittsburgh and meeting Ellington

Strayhorn returned to Pittsburgh, and attended Westinghouse High School, later attended by Erroll Garner and Ahmad Jamal. In Pittsburgh, he began his musical career, studying classical music for a time at the Pittsburgh Music Institute, writing a high school musical, forming a musical trio that played daily on a local radio station, and, while still in his teens, composing (with lyrics) the songs "Life Is Lonely" (later renamed "Lush Life"), "My Little Brown Book", and "Something to Live For". While still in grade school, he worked odd jobs to earn enough money to buy his first piano, and took lessons from Charlotte Enty Catlin.[2] While in high school, he played in the school band, and studied under Carl McVicker, who had also instructed jazz pianists Erroll Garner and Mary Lou Williams. By age 19, he was writing for a professional musical, Fantastic Rhythm.

Though classical music was Strayhorn's first love, his ambition to become a classical composer was shot down by the harsh reality of a black man trying to make it in the classical world, which at that time was almost completely white. Strayhorn was then introduced to the music of pianists like Art Tatum and Teddy Wilson at age 19. The artistic influence of these musicians guided him into the realm of jazz where he remained for the rest of his life. His first jazz exposure was in a combo called the Mad Hatters that played around Pittsburgh. Strayhorn's fellow students, guitarist Bill Esch and drummer Mickey Scrima, also influenced his move towards jazz, and he began writing arrangements for Buddy Malone's Pittsburgh dance band after 1937.[3]

He met Duke Ellington in December 1938, after an Ellington performance in Pittsburgh (he had first seen Ellington play in Pittsburgh in 1933). Here he first told, and then showed the band leader how he would have arranged one of Duke's own pieces. Ellington was impressed enough to invite other band members to hear Strayhorn. At the end of the visit, he arranged for Strayhorn to meet him when the band returned to New York. Strayhorn worked for Ellington for the next quarter century as an arranger, composer, occasional pianist and collaborator until his early death from cancer. As Ellington described him, "Billy Strayhorn was my right arm, my left arm, all the eyes in the back of my head, my brain waves in his head, and his in mine."[4] 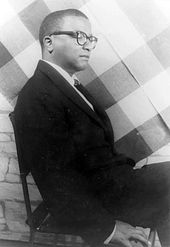 Strayhorn's relationship with Ellington was always difficult to pin down: Strayhorn was a gifted composer and arranger who seemed to flourish in Duke's shadow. Ellington was arguably a father figure and the band was affectionately protective of the diminutive, mild-mannered, unselfish Strayhorn, nicknamed by the band "Strays", "Weely", and "Swee' Pea". Ellington may have taken advantage of him,[5] but not in the mercenary way in which others had taken advantage of Ellington; instead, he used Strayhorn to complete his thoughts and introduce new musical ideas,[6] while giving him the freedom to write on his own and enjoy at least some of the credit he deserved. Though Duke Ellington took credit for much of Strayhorn's work, he did not maliciously drown out his partner. Ellington would make jokes onstage like, "Strayhorn does a lot of the work but I get to take the bows!"[7] On the other hand, Ellington did not oppose his publicists' frequently crediting him without any mention of Strayhorn, and, despite the latter's attempts to hide his dissatisfaction, "Strayhorn revealed", at least to his friends, "a deepening well of unease about his lack of public recognition as Ellington's prominence grew."[8]

Strayhorn composed the band's best known theme, "Take the 'A' Train", and a number of other pieces that became part of the band's repertoire. In some cases Strayhorn received attribution for his work such as "Lotus Blossom", "Chelsea Bridge", and "Rain Check", while others, such as "Day Dream" and "Something to Live For", were listed as collaborations with Ellington or, in the case of "Satin Doll" and "Sugar Hill Penthouse", were credited to Ellington alone. Strayhorn also arranged many of Ellington's band-within-band recordings and provided harmonic clarity, taste, and polish to Duke's compositions. On the other hand, Ellington gave Strayhorn full credit as his collaborator on later, larger works such as Such Sweet Thunder, A Drum Is a Woman, The Perfume Suite and The Far East Suite, where Strayhorn and Ellington worked closely together.[9] Strayhorn also often sat in on the piano with the Ellington Orchestra, both live and in the studio.

Detroit Free Press music critic Mark Stryker concludes that the work of Strayhorn and Ellington in the score of the 1959 Hollywood film Anatomy of a Murder is "indispensable, [although] ... too sketchy to rank in the top echelon among Ellington-Strayhorn masterpiece suites like Such Sweet Thunder and The Far East Suite, but its most inspired moments are their equal."[10] Film historians have recognized the soundtrack "as a landmark—the first significant Hollywood film music by African Americans comprising non-diegetic music, that is, music whose source is not visible or implied by action in the film, like an on-screen band." The score "avoided the cultural stereotypes that previously characterized jazz scores and rejected a strict adherence to visuals in ways that presaged the New Wave cinema of the ’60s."[11]

In 1960 the two collaborated on the album The Nutcracker Suite, recorded for the Columbia label and featuring jazz interpretations of "The Nutcracker" by Tchaikovsky, arranged by the two.[12] The original album cover is notable for the inclusion of Strayhorn's name and picture along with Ellington's on the front.

Shortly before going on his second European tour with his orchestra, from March to May 1939, Ellington announced to his sister Ruth and son Mercer Ellington that Strayhorn "is staying with us."[13] Through Mercer, Strayhorn met his first partner, African-American musician Aaron Bridgers, with whom Strayhorn lived until Bridgers moved to Paris in 1947.[14]

Strayhorn was openly gay.[15] He participated in many civil rights causes. As a committed friend to Martin Luther King Jr., he arranged and conducted "King Fit the Battle of Alabama'" for the Ellington Orchestra in 1963 for the historical revue (and album) My People, dedicated to King.

Strayhorn's strong character left an impression on many people who met him. He had a major influence on the career of Lena Horne, who wanted to marry Strayhorn and considered him to have been the love of her life.[16] Strayhorn used his classical background to improve Horne's singing technique. They eventually recorded songs together. In the 1950s, Strayhorn left his musical partner Duke Ellington for a few years to pursue a solo career of his own. He released a few solo albums and revues for the Copasetics (a New York show-business society), and took on theater productions with his friend Luther Henderson.

In 1964, Strayhorn was diagnosed with esophageal cancer, the disease that took his life in 1967. Strayhorn finally succumbed in the early morning on May 31, 1967, in the company of his partner, Bill Grove, not in Lena Horne's arms as has often been falsely reported. By her own account, she was touring in Europe when she received the news of Strayhorn's death.[17] His ashes were scattered in the Hudson River by a gathering of his closest friends.[18]

While in the hospital, he had submitted his final composition to Ellington. "Blood Count" was used as the third track to Ellington's memorial album for Strayhorn, …And His Mother Called Him Bill, which was recorded several months after Strayhorn's death. The last track of the album is a spontaneous solo version of "Lotus Blossom" performed by Ellington, who sat at the piano and played for his friend while the band (who can be heard in the background) were packing up after the formal end of the recording session.[19]

Strayhorn's arrangements had a tremendous impact on the Ellington band. Ellington always wrote for the personnel he had at the time, showcasing both the personalities and sound of soloists such as Johnny Hodges, Harry Carney, Ben Webster, Lawrence Brown and Jimmy Blanton, and drawing on the contrasts between players or sections to create a new sound for his band. Strayhorn brought a more linear, classically schooled ear to Ellington's works, setting down in permanent form the sound and structures that Ellington sought.[citation needed]

A Pennsylvania State Historical Marker highlighting Strayhorn's accomplishments was placed at Westinghouse High School in Pittsburgh, from which he graduated.[20] In North Carolina, a state historical marker honoring Strayhorn is located in downtown Hillsborough, near his "boyhood home".[21]

The former Regent Theatre in Pittsburgh's East Liberty neighborhood was renamed the Kelly Strayhorn Theater in honor of Strayhorn and fellow Pittsburgher Gene Kelly in 2000. It is a community-based performing arts theater.

In his autobiography and in a spoken word passage in his Second Sacred Concert, Duke Ellington listed what he considered Strayhorn's "four major moral freedoms": "freedom from hate, unconditionally; freedom from self-pity (even through all the pain and bad news); freedom from fear of possibly doing something that might possibly help another more than it might himself and freedom from the kind of pride that might make a man think that he was better than his brother or his neighbor."[23]