William Clarence Eckstine (July 8, 1914 – March 8, 1993)[1] was an American jazz and pop singer and a bandleader during the swing era. He was noted for his rich, almost operatic bass-baritone voice.[2] His recording of "I Apologize" (MGM, 1948) was given the Grammy Hall of Fame Award in 1999. The New York Times described him as an "influential band leader" whose "suave bass-baritone" and "full-throated, sugary approach to popular songs inspired singers like Earl Coleman, Johnny Hartman, Joe Williams, Arthur Prysock and Lou Rawls."[3] 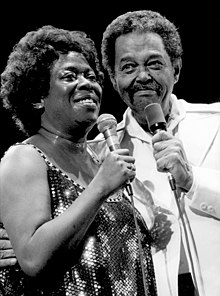 Eckstine was born in Pittsburgh, Pennsylvania, the son of William Eckstein, a chauffeur, and Charlotte Eckstein, a seamstress. Eckstine's paternal grandparents were William F. Eckstein and Nannie Eckstein, a mixed-race, married couple who lived in Washington, D.C.; both were born in 1863. William was born in Prussia, and Nannie in Virginia.[4] Billy's sister, Maxine, was a high school teacher.[citation needed]

A State Historical Marker is placed at 5913 Bryant Street in Pittsburgh's Highland Park neighborhood to mark the house where Eckstine grew up.[8][9] 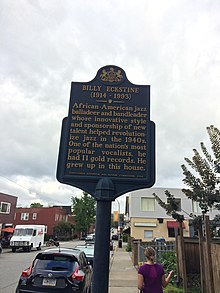 Heading to Chicago, Eckstine joined Earl Hines' Grand Terrace Orchestra in 1939, staying with the band as vocalist and trumpeter until 1943. By that time, Eckstine had begun to make a name for himself through the Hines band's juke-box hits such as "Stormy Monday Blues", and his own "Jelly Jelly".

In 1944, Eckstine formed his own big band and it became the finishing school for adventurous young musicians who would shape the future of jazz. Included in this group were Dizzy Gillespie, Dexter Gordon, Miles Davis, Art Blakey, Charlie Parker, and Fats Navarro, as well as vocalist Sarah Vaughan. Tadd Dameron, Gil Fuller and Jerry Valentine were among the band's arrangers. The Billy Eckstine Orchestra is considered to be the first bop big-band, and had Top Ten chart entries that included "A Cottage for Sale" and "Prisoner of Love". Both were awarded a gold disc by the RIAA.[10]

Dizzy Gillespie, in reflecting on the band in his 1979 autobiography To Be or Not to Bop, gives this perspective: "There was no band that sounded like Billy Eckstine's. Our attack was strong, and we were playing bebop, the modern style. No other band like this one existed in the world." In 1946 Eckstine starred as the hero in the musical film Rhythm in a Riff, which also starred Ann Baker and Lucky Millinder.[11][12]

Eckstine became a solo performer in 1947, with records featuring lush sophisticated orchestrations. Even before folding his band, Eckstine had recorded solo to support it, scoring two million-sellers in 1945 with "Cottage for Sale" and a revival of "Prisoner of Love". Far more successful than his band recordings, these prefigured Eckstine's future career. Eckstine would go on to record over a dozen hits during the late 1940s. He signed with the newly established MGM Records, and had immediate hits with revivals of "Everything I Have Is Yours" (1947), Rodgers and Hart's "Blue Moon" (1948), and Juan Tizol's "Caravan" (1949).

Eckstine had further success in 1950 with Victor Young's theme song to "My Foolish Heart," and the next year with a revival of the 1931 Bing Crosby hit, "I Apologize".

His 1950 appearance at the Paramount Theatre in New York City drew a larger audience than Frank Sinatra at his Paramount performance.

In 1951, Eckstine performed at the seventh famed Cavalcade of Jazz concert held at Wrigley Field in Los Angeles which was produced by Leon Hefflin, Sr. on July 8. Also featured were Lionel Hampton and his Revue, Percy Mayfield, Jimmy Witherspoon, Joe Liggins' Honeydrippers and Roy Brown.[13]

Eckstine was the subject of a three-page profile in the 25 April 1950 issue of LIFE magazine, in which the photographer Martha Holmes accompanied Eckstine and his entourage during a week in New York City.[14] One photograph taken by Holmes and published in LIFE showed Eckstine with a group of white female admirers, one of whom had her hand on his shoulder and her head on his chest while she laughed. Eckstine's biographer Cary Ginell, wrote of the image that Holmes "...captured a moment of shared exuberance, joy, and affection, unblemished by racial tension".[15] Holmes would later describe the photograph as the favorite of the many she had taken in her career as it "...told just what the world should be like".[15] The photograph was considered so controversial that an editor at LIFE sought personal approval from Henry Luce, the magazine's publisher, who said it should be published.[16] The publication of the image caused letters of protest to be written to the magazine, and singer Harry Belafonte subsequently said of the publication that "When that photo hit, in this national publication, it was if a barrier had been broken".[17] The controversy that resulted from the photograph had a seminal effect on the trajectory of Eckstine's career. Tony Bennett would recall that "It changed everything...Before that, he had a tremendous following...and it just offended the white community", a sentiment shared by pianist Billy Taylor who said that the "coverage and that picture just slammed the door shut for him".[18]

The 1960 Las Vegas live album, No Cover, No Minimum, featured Eckstine taking a few trumpet solos and showcased his nightclub act. He recorded albums for Mercury and Roulette in the early 1960s, and appeared on Motown albums during the mid to late 1960s. After recording sparingly during the 1970s for Al Bell's Stax/Enterprise imprint, the international touring Eckstine made his last recording, the Grammy-nominated Billy Eckstine Sings with Benny Carter in 1986.

Eckstine made numerous appearances on television variety shows, including on The Ed Sullivan Show, The Nat King Cole Show, The Tonight Show with Steve Allen, Jack Paar, and Johnny Carson, The Merv Griffin Show, The Art Linkletter Show, The Joey Bishop Show, The Dean Martin Show, The Flip Wilson Show, and Playboy After Dark. He also performed as an actor in the TV sitcom Sanford and Son, and in such films as Skirts Ahoy, Let's Do It Again, and Jo Jo Dancer. He performed The Star-Spangled Banner prior to Game 4 of the 1979 World Series at Three Rivers Stadium in his native Pittsburgh.

Culturally Eckstine was a fashion icon. He was famous for his "Mr. B. Collar" – a high roll collar that formed a "B" over a Windsor-knotted tie (or without a tie at all). The collars were worn by many a hipster in the late 1940s and early 1950s.

In 1984 Eckstine recorded his penultimate album, I Am a Singer, arranged and conducted by Angelo DiPippo and featuring Toots Thielemans on harmonica. In November 1986, Eckstine recorded with saxophonist Benny Carter for his 1987 album Billy Eckstine Sings with Benny Carter.[19] Eckstine made his final recordings for Motorcity Records, a label for ex-Motown artists founded by Ian Levine.

He married his first wife, June, in 1942. After their divorce in 1952, he remarried shortly after to actress and model Carolle Drake in 1953, and they remained married until his death. He was the father of four children by his second marriage and two step-children, including Ed Eckstine, a president of Mercury Records; Guy Eckstine, a Columbia and Verve Records A&R executive and record producer; singer Gina Eckstine; and actor Ronnie Eckstine.[6]

Eckstine suffered a stroke while performing in Salina, Kansas, in April 1992, and never performed again. Though his speech improved in the hospital, Eckstine had a heart attack, and he died a few months later on March 8, 1993, aged 78. Eckstine's final word was "Basie".[20]

His friend Duke Ellington recalled Eckstine's artistry in his 1973 autobiography Music is My Mistress:

Eckstine-style love songs opened new lines of communication for the man in the man-woman merry-go-round, and blues a la B were the essence of cool. When he made a recording of "Caravan", I was happy and honored to watch one of our tunes help take him into the stratosphere of universal acclaim. And, of course, he hasn't looked back since. A remarkable artist, the sonorous B. ... His style and technique have been extensively copied by some of the neocommercial singers, but despite their efforts he remains out front to show how and what should have been done.

Sammy Davis, Jr. made several live appearances and impersonated Eckstine. Eckstine was a pallbearer at Davis' funeral in 1990.

I looked up to Mr. B as an idol. I wanted to dress like him, talk like him, pattern my whole life as a musician and as a complete person in the image of dignity that he projected.... As a black man, Eckstine was not immune to the prejudice that characterized the 1950s.[21]

Jones is quoted in The Pleasures of Jazz as also saying of Eckstine:

If he'd been white, the sky would have been the limit. As it was, he didn't have his own radio or TV show, much less a movie career. He had to fight the system, so things never quite fell into place."[22]

The title of a 1956 promotional movie by the C. G. Conn Company, Mr. B Natural, is derivative of Eckstine's nickname "Mr. B." (The title character bears no resemblance to Eckstine.)