Arthur Edward Pepper Jr. (September 1, 1925 – June 15, 1982)[1] was an American alto saxophonist and very occasional tenor saxophonist and clarinetist. Active in West Coast jazz, Pepper came to prominence in Stan Kenton's big band. He was known for his emotionally charged performances and several stylistic shifts throughout his career, and was described by critic Scott Yanow as having "attained his goal of becoming the world's great altoist" at the time of his death.[2]

Art Pepper was born in Gardena, California, United States.[3] His mother was a 14-year-old runaway; his father, a merchant seaman. Both were violent alcoholics, and when Pepper was still quite young, he was sent to live with his paternal grandmother. He expressed early musical interest and talent, and he was given lessons. He began playing clarinet at nine, switched to alto saxophone at 13,[4] and immediately began jamming on Central Avenue, the black nightclub district of Los Angeles.

At the age of 17, he began playing professionally with Benny Carter and then became part of the Stan Kenton orchestra, touring with that band until he was drafted in 1943.[4] After the war, he returned to Los Angeles, and joined the Kenton Innovations Orchestra.[4] By the 1950s, Pepper was recognized as one of the leading alto saxophonists in jazz, finishing second only to Charlie Parker as Best Alto Saxophonist in the DownBeat magazine Readers Poll of 1952. Along with Chet Baker, Gerry Mulligan, and Shelly Manne, and perhaps due more to geography than playing style, Pepper is often associated with the musical movement known as West Coast jazz, as contrasted with the East Coast (or "hot") jazz of Charlie Parker, Dizzy Gillespie and Miles Davis. Some of Pepper's best known albums from the 1950s are Art Pepper Meets the Rhythm Section, Art Pepper + Eleven – Modern Jazz Classics, Gettin' Together, and Smack Up.[4] Other recordings from this time appear on The Aladdin Recordings (three volumes), The Early Show, The Late Show, Surf Ride, and Art Pepper with Warne Marsh (also issued as The Way It Was!), which features a session recorded with Warne Marsh.

His career was repeatedly interrupted by several prison stints stemming from his addiction to heroin,[4] but Pepper managed to have a productive "comebacks". Remarkably, his substance abuse and legal travails did not affect the quality of his recordings, which maintained a high level of musicianship throughout his career until his death in 1982.

His last comeback saw Pepper, who had started his career in Stan Kenton's big band, becoming a member of Buddy Rich's Big Band from 1968 to 1969. After beginning methadone therapy in the mid-1970s, he toured Europe and Japan with his own groups and recorded many albums, mostly for Galaxy Records, a subsidiary of Fantasy Records., Pepper's later albums include Living Legend, Art Pepper Today, Among Friends, and Live in Japan.[4]

Pepper lived for many years in the hills of Echo Park, in Los Angeles. He became a heroin addict in the 1940s, and his career was interrupted by drug-related prison sentences in 1954–56, 1960–61, 1961–64, and 1964–65; the final two sentences were served in San Quentin.[1] While in San Quentin, he played in an ensemble with saxophonist Frank Morgan.[5] In the late 1960s, Pepper spent time in Synanon, a rehabilitation program that turned out to be a cult.

His autobiography,[6] Straight Life (1980, co-written with his third wife Laurie Pepper), discusses the jazz music world, as well as drug and criminal subcultures of mid-20th century California. Soon after the publication of this book, the director Don McGlynn released the documentary film Art Pepper: Notes from a Jazz Survivor,[7] discussing his life and featuring interviews with both Art and his wife Laurie, as well as footage from a live performance in Malibu jazz club. Laurie Pepper also released an interview to NPR.

Pepper died of a stroke in Los Angeles on June 15, 1982, aged 56.[6][8] He is interred in the Abbey of the Psalms Mausoleum in the Hollywood Forever Cemetery, Hollywood. 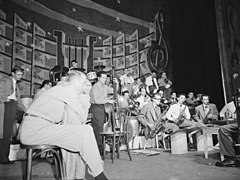 With Herb Ellis and Jimmy Giuffre

Transcriptions available on the Internet:

A more extensive bibliography is issued by the Jazzinstitut Darmstadt