Antônio Carlos Brasileiro de Almeida Jobim (January 25, 1927 – December 8, 1994), also known as Tom Jobim (Portuguese pronunciation: [tõ ʒoˈbĩ]), was a Brazilian composer, pianist, songwriter, arranger and singer. Widely considered as one of the great exponents of Brazilian music, Jobim internationalized bossa nova and, with the help of important American artists, merged it with jazz in the 1960s to create a new sound with remarkable popular success. As such he is sometimes known as the "father of bossa nova".[1]

Jobim was a primary force behind the creation of the bossa nova style, and his songs have been performed by many singers and instrumentalists internationally.

In 1965, the album Getz/Gilberto was the first jazz album to win the Grammy Award for Album of the Year. It also won for Best Jazz Instrumental Album – Individual or Group and for Best Engineered Album, Non-Classical. The album's single "Garota de Ipanema" ("The Girl from Ipanema"), one of the most recorded songs of all time, won the Record of the Year. Jobim composed many songs that are now included in jazz and pop standard repertoires. The song "Garota de Ipanema" has been recorded over 240 times by other artists.[2] His 1967 album with Frank Sinatra, Francis Albert Sinatra & Antônio Carlos Jobim, was nominated for Album of the Year in 1968.

Antônio Carlos Jobim was born in the middle-class district of Tijuca in Rio de Janeiro. His father, Jorge de Oliveira Jobim (São Gabriel, Rio Grande do Sul, April 23, 1889 – July 19, 1935), was a writer, diplomat, professor and journalist. He came from a prominent family, being the great nephew of José Martins da Cruz Jobim,[3] senator, privy councillor and physician of Emperor Dom Pedro II. While studying medicine in Europe, José Martins added Jobim to his last name, paying homage to the village where his family came from in Portugal, the parish of Santa Cruz de Jovim, Porto.[4][5] His mother, Nilza Brasileiro de Almeida (c. 1910 – November 17, 1989), was of partly Indigenous descent from Northeastern Brazil.[6]

When Antônio was still an infant, his parents separated and his mother moved with her children (Antônio Carlos and his sister Helena Isaura, born February 23, 1931) to Ipanema, the beachside neighborhood the composer would later celebrate in his songs. In 1935, when the elder Jobim died, Nilza married Celso da Frota Pessoa (died February 2, 1979), who would encourage his stepson's career. He was the one who gave Jobim his first piano. As a young man of limited means, Jobim earned his living by playing in nightclubs and bars and later as an arranger for a recording label, before starting to achieve success as a composer.

Jobim's musical roots were planted firmly in the work of Pixinguinha, the legendary musician and composer who began modern Brazilian music in the 1930s. Among his teachers were Lúcia Branco and, from 1941 on, Hans-Joachim Koellreutter, a German composer who lived in Brazil and introduced atonal and twelve-tone composition in the country. Jobim was also influenced by the French composers Claude Debussy and Maurice Ravel, and by the Brazilian composers Ary Barroso and Heitor Villa-Lobos, who has been described as Jobim's "most important musical influence."[7] Among many themes, his lyrics talked about love, self-discovery, betrayal, joy and especially about the birds and natural wonders of Brazil, like the "Mata Atlântica" forest, characters of Brazilian folklore and his home city of Rio de Janeiro.

In the 1940s, Tom Jobim started to play piano in bars and nightclubs of Rio de Janeiro and in the first years of the 1950s he worked as an arranger in the Continental Studio, where he had his first composition recorded, in April 1953, when the Brazilian singer Mauricy Moura recorded Incerteza, a composition by Tom Jobim with lyrics by Newton Mendonça.[8][9]

Jobim became prominent in Brazil when he teamed up with poet and diplomat Vinicius de Moraes to write the music for the play Orfeu da Conceição (1956). The most popular song from the show was "Se Todos Fossem Iguais A Você" ("If Everyone Were Like You"). Later, when the play was adapted into a film, producer Sacha Gordine did not want to use any of the existing music from the play. Gordine asked de Moraes and Jobim for a new score for the film Orfeu Negro, or Black Orpheus (1959). Moraes was at the time away in Montevideo, Uruguay, working for the Itamaraty (the Brazilian Ministry of Foreign Affairs) and so he and Jobim were only able to write three songs, primarily over the telephone ("A felicidade", "Frevo" and "O nosso amor"). This collaboration proved successful, and de Moraes went on to pen the lyrics to some of Jobim's most popular songs.

In 1958 the Brazilian singer and guitarist João Gilberto recorded his first album with two of the most famous songs of Tom Jobim: Desafinado and Chega de Saudade. This album inaugurates the Bossa Nova movement in Brazil. The sophisticated harmonies of his songs caught the attention of jazz musicians in the United States, principally after the first performance of Tom Jobim at Carnegie Hall, in 1962.[10] 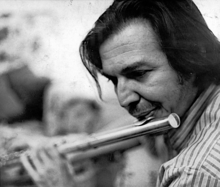 Jobim in 1972 (National Archives of Brazil)

A key event in making Jobim's music known in the English-speaking world was his collaboration with the American jazz saxophonist Stan Getz, the Brazilian singer João Gilberto, and Gilberto's wife at the time, Astrud Gilberto, which resulted in two albums, Getz/Gilberto (1963) and Getz/Gilberto Vol. 2 (1964). The release of Getz/Gilberto created a bossa nova craze in the United States and subsequently internationally. Getz had previously recorded Jazz Samba with Charlie Byrd (1962), and Jazz Samba Encore! with Luiz Bonfá (1964). Jobim wrote many of the songs on Getz/Gilberto, which became one of the best-selling jazz albums of all time, and turned Astrud Gilberto, who sang on "Garota de Ipanema" (The Girl from Ipanema) and "Corcovado", into an international sensation. At the Grammy Awards of 1965 Getz/Gilberto won the Grammy Award for Album of the Year, the Grammy Award for Best Jazz Instrumental Album, Individual or Group and the Grammy Award for Best Engineered Album, Non-Classical. "The Girl from Ipanema" won the Grammy Award for Record of the Year. Among his later hits is "Águas de Março" (Waters of March, 1972), for which he wrote both the Portuguese and English lyrics, and which was then translated into French by Georges Moustaki (Les Eaux de Mars, 1973).[11] 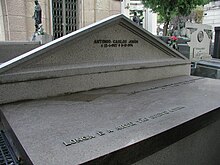 Grave of Jobim in the Saint John the Baptist Cemetery, Rio de Janeiro

In early 1994, after finishing his album Antonio Brasileiro, Jobim complained to his doctor, Roberto Hugo Costa Lima, of urinary problems. He underwent an operation at Mount Sinai Hospital in New York City on December 2, 1994. On December 8, while recovering from surgery, he had a cardiac arrest caused by a pulmonary embolism, and two hours later another cardiac arrest, from which he died.[14] He was survived by his children and grandchildren. His last album, Antonio Brasileiro, was released posthumously three days after his death.[15]

His body lay in state until given a proper burial on December 20, 1994. He is buried in the Cemitério São João Batista in Rio de Janeiro.[16]

Jobim is widely regarded as one of the most important songwriters of the 20th century. Many of his songs are jazz standards.

Jobim was an innovator in the use of sophisticated harmonic structures in popular song. Some of his melodic twists, like the melody insisting on the major seventh of the chord, became commonplace in jazz after he used them.[17]

He won a Lifetime Achievement Award at the 54th Grammy Awards in 2012.[19] As a posthumous homage, on January 5, 1999, the Municipality of Rio de Janeiro changed the name of Rio's Galeão International Airport, located on Governador Island, to bear the composer's name. Galeão Airport is explicitly mentioned in his composition "Samba do Avião". In 2014, Jobim was posthumously inducted to the Latin Songwriters Hall of Fame.[20] In 2015, Billboard named Jobim as one of The 30 Most Influential Latin Artists of All Time.[21]

The official mascot of the 2016 Summer Paralympics in Rio de Janeiro, Tom, was named after him.[24]